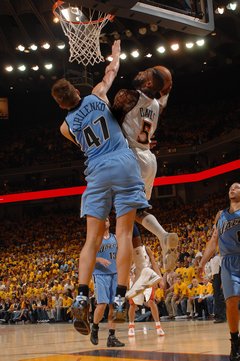 -I need to get myself one of those “We Believe” T-shirts.

-I think it’s safe to assume that Biedrins and Kirilenko are the two guys in this series who spend the most time working on their hair. Think they compare notes and compliment one another when they cross paths on the court? I wouldn’t bet against it.

(Don’t worry Matt Barnes, I’m fully aware of that mini-mohawk thing you’ve got going on. It’s a good look for you.)

-ESPN brought us the game tonight. Here’s my question: How is Hubie Brown — who called the game alongside Mike Tirico — still on top of his game while Dick Stockton has turned into a bumbling fool? I mean, they’re both ancient, but one guy is decisively better at his job than the other. I’m confused.

(NBA TV ran game 3 of the Pistons/Bulls ECF series from ’89 this week — the one where Mike (at the absolute zenith of his athletic powers) hits an impossible running jumper over Rodman and Zeke to win the game. Hubie and Dick were calling the game for CBS, and it’s shocking to observe how much Stockton’s skills as an announcer have declined over the years. Sad, really.)

-In the first quarter, Baron juked D-Fish with one of the nastiest right-to-left crossovers you’ll ever see. So mean.

-I know it’s been beaten to death, but how about that Oakland crowd. And congrats to the ESPN producer who made the decision to break out the decibel-level reader.

(The last time I heard an arena this loud, ironically enough, was when the Bulls and Jazz played in the Finals about a decade ago. The Delta Center was so loud that Phil Jackson had to wear earplugs.)

-Kirilenko might be my favorite shot-blocker in the whole League. I love his reaction (or lack thereof) after stuffing a shot. He’s like a KGB assassin after making a kill. Just puts his head down and walks away as if nothing happened. Cold-blooded.

-Hubie Brown in the first quarter: “Don’t you love it? You gotta love it when young guys have soft hands!” Um, whatever you say, creepy old guy.

-After Biedrins dunked over Kirilenko with extreme prejudice midway through the second quarter, I screamed out loud, and then the following question popped into my head: Have two white guys ever been featured in a SLAM-a-da-month? Could we be witnessing history tonight?

-I don’t know if this is new or not — it’s certainly the first time I’ve noticed it — but Golden State’s crowd loses major points for breaking out the thunderstix. You cannot be considered a great crowd and still resort to thunderstix. Whoever made the decision to hand those out is a douchebag, pure and simple.

-Seriously, does Golden State ever miss a three point shot attempt when they’re playing at home?

(Another thing about this Warriors team: They’re one of the few squads – if not the only squad – who keeps the game immensely watchable regardless of the score. They could be leading by 50 and you would feel guilty if you flicked over to another channel.)

-Alright, I’m convinced: Baron Davis, thanks to these Playoffs, is now arguably the most exciting player to watch when coming off a screen. Did you see that spin move to split the trapping double team in the third quarter? He practically disappeared. Diiiiiirty.

(Speaking of disappearing, what a great 360 degree bank shot by The Baron in the fourth quarter. The last time I saw him do something like that was against the Pacers when he was an explosive guard for the Hornets. Ah, memories.)

-So many great things about the Baron Davis dunk on Andrei Kirilenko:

*How high Davis got, and how viciously he dunked it. I mean, he cocked that waaaaaaay back.

*Adonal Foyle busting out the Mutombo-during-the-dunk-contest face. Welcome to the Playoffs, big fella.

*I hate to compare anyone’s dunks to Vince Carter’s (because it’s usually an insult to Vince), but that dunk was the closest thing to the one Half-Man threw down on Zo in Miami last season.

*So much for that white-on-white slam-a-da-month.

*I can’t decide which dunk was better: Baron’s on AK-47 or Kevin Johnson’s on Dream in the ’94 Playoffs. Tough call.

*There’s a good chance that Kirilenko’s wife filed for divorce immediately after witnessing the dunk.

*The fact that two of my buddies called seconds after it happened, and the fact that we both just started screaming into our cell phones. No words were needed.

*And my absolute favorite moment of the playoffs so far: Stephen Jackson calmly dusting off Baron Davis after the throwdown. I almost fell out of my chair laughing when I saw that.

-Man, Don Nelson is one cranky son of a bitch now that he doesn’t have something to sip on during the postgame press conference. He chewed a reporter’s head off because dude had the gall to ask him about Golden State’s defensive strategy against Boozer. Chill out, coach. Have a cold one. Oh wait, you can’t. Sucks to be you.

-In order for the Warriors to tie up the series in Game Four, a few things need to happen: the bombs need to keep falling (they hit 15 of them in game 3); Baron needs to have another monster game; they need to keep Utah’s rebounding edge under 15; and it would be nice if Deron Williams found himself in foul trouble early on again.

OK, we now have a series. And it’s a great one. I can’t wait until Sunday night. Oakland, baby. Oakland.