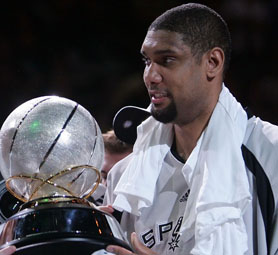 As an objective purveyor of all things hoop, and specifically the NBA’s Western Conference, I feel a bit cheated as we watch the sun set on the conference finals. The East—for once—has put forth the better series and has given us four competitive games and an even 2-2 split. Our (by that, I mean the west) conference final really had already transpired when the Spurs and Suns met in that exciting, if not tumultuous 6-game thrill-ride of a series. While I have nothing but respect for not only Jerry Sloan, but the Utah Jazz as a whole, I feel wronged that we were forced to stomach this series. I said from the onset, that it was a match-up nightmare for the Jazz. To be honest, the Spurs have the advantage on pretty much every team they face before the ball is even tipped. They know how they are going to play; they know how they will go about doing it, and they almost always are successful in doing so.

Their Big 3 of Tim Duncan, Tony Parker, and Manu Ginobili present issues on every night, against every team. Each of them can go for 30, but each can also do more than just score. Duncan is a perennial First-Team All-Defensive player and his double-digit rebound evenings happen about as regularly as Lindsay Lohan checks into rehab. Parker can distribute with the best in the league, he can also run a fast-break as well as anyone (despite having inferior “finishers”) and he can control the half-court like few. Manu? Well, love him or hate him (I have both in me) he pushes this group to new levels regardless of whether he is in the starting lineup or not. He can hit the 3-ball (like many of his Spur teammates) he drives to the hoop with unmatched voracity, he is often overlooked as a rebounder, and his defensive annoyance is second to no other in the league. Remember, defense is about making it difficult on your opponent regardless of the atheistic beauty of the ultimate product.

THERE WAS A GAME, RIGHT? Kinda.

Last night, as the Jazz and Spurs prepared for Game 5, Utah looked to be even more “behind the eight-ball” with Deron Williams still hobbling from Game 4 and backcourt mate Derek Fisher still in transit back from NYC where his 10-month old daughter was going through her second round of chemotherapy for her rare eye disorder. The tone was defeatist from the beginning, as Sloan even urged his guys to not treat this game like an exhibition game.

Unfortunately for the Jazz faithful, this was about as far from a competitive conference finals game as has ever been played. San Antonio started hot, jumped all over their opponents defensively, and cruised to one of the easiest victories in this postseason, winning 109-84. Using first-quarter runs of 8-0 and 14-0, the Spurs held a gargantuan 30-11 lead with still 2:35 left. In the past few games, Ginobili’s spark off the bench had been a huge contributor to the Spurs pulling ahead, but his guys were taking care of things before the Argentine could even check into the game. Taking full advantage of a hobbled Williams, Parker drove, shot, and passed his way to a beautiful 21-5-5 evening despite logging a mere 27 minutes. The Jazz shot an abysmal 38% from the field and barely had three guys in double figures, being led by Andrei Kirilenko’s 13. At a couple intervals (including halftime) the Jazz were able to bring the Spurs back to within 16, but the game was never close.

Exhibition? Rafael Araujo, Ronnie Brewer, Beno Udrih, Matt Bonner, Dee Brown, and one of the Collins twins all logged minutes in this game. You tell me.

The Spurs will now sit and wait for the dust to settle out east. Many (myself included) thought that the competitive attrition out west would cause the eventual representative to be beat-up and tired by the time the Finals finally rolled around. Due to the lack of reseeding and the surprise Dallas upset, the Spurs now looked primed and ready to go for their fourth ‘chip in the last eight years. Detroit and Cleveland, on the other hand, are knee deep in a series that likely will go seven. Time for another banner in the River City.