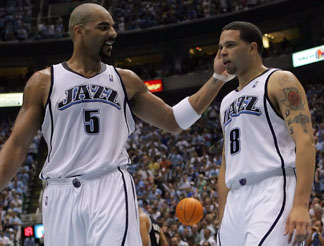 Not too many people were holding their breath in anticipation for the Utah Jazz return to playoff prominence. At the start of last season, with the post-Stockton & Malone era in full swing, the Jazz won 12 of their first 13 games – a franchise record. Even though the team struggled through a tough March, the Jazz returned to the playoffs for the first time in four years and finished with their best record in six years, logging their first division title in seven years.

While the NBA was busy talking about Tracy McGrady going to the playoffs or whatever, the Jazz snuck up from behind and shot down the Rockets hopes of cruising deep into the playoffs. Next-up, the Jazz hurt the hearts (and some wallets) of Warrior fans everywhere by eliminating Golden State in five games.

And then along came the Spurs, who sent the Jazz back to Salt Lake City in just five games. Although the loss marked the end of a run of exceeded expectations for the Jazz, the end of the series also came with an emotional breakdown between the players.

When your starting point guard tells post-game reporters that “some guys were already on vacation” and that they “needed to find where their hearts are at,” like Deron Williams did, things have probably hit rock bottom. But the Jazz already had an emotional playoff run. One that included Andrei “AK-47” Kirilenko breaking down and crying twice – in the first round no less – in front of the media.

Hopefully, as Jazz bench boss Jerry Sloan enters his 20th season with the team, his young roster will do some maturing of its own. There is little doubt that Deron Williams is the point guard of the future. Williams together with veteran forward Carlos Boozer, could possibly bring the Jazz back to regular playoff appearances, and the ever elusive championship the Salt Lake City fans never saw. They actually have enough combined talent to do that much themselves. To get any further than the second round or conference finals with the current Jazz roster is next to impossible.

BACKCOURT: Even as Deron Williams only gets better, the point guard position might be the Jazz’ weakest position. The Jazz signed journeyman Jason Hart in hopes he will pan-out as a solid back-up for Williams. Ronnie Price, who will be competing for the 3rd point guard spot, averaged less than one assist per game in 58 contests with Sacramento last year. Dee Brown, who dropped a tragic attempt at hip-hop music this summer, decided not to return to the Jazz and accept a guaranteed contract in Turkey.

In the two guard spot, Gordon Giricek is the Jazz’ only proven player. He has the ability to shoot, but his defense leaves a lot to be desired. Other options at the two spot aren’t as cool. Ronnie Brewer appeared in 56 games last year and didn’t really leave a great impression. Morris Almond, a rookie out of Rice Unveristy, and C.J. Miles, a direct from high schooler entering his third year, are both works-in-progress. Also, look for veteran Matt Harpring to see extended floor time and possibly be used in an option where he and AK47 are the starting wings.

The essential problem for the Jazz in the backcourt is that they didn’t make up for the departed Derek Fisher. With the ability to score and play both guard positions, be prepared for a lack of depth and experience to be a theme in the Utah backcourt.

FRONTCOURT: Although Andrei Kirilenko’s production has slowed in recent years, there is no secret to the fact he’d love to be more involved in the Utah offense. After the Jazz were defeated by the Spurs, ending Utah’s season, Williams questioned the hearts of Kirilenko and starting center Mehmet Okur. Although the friction is reportedly settled, it isn’t clear how much longer, Kirilenko, Okur or Gordan Giricek will have in Salt Lake if the Jazz don’t have a good start to the season. While Utah’s backcourt suffers from a lack of experience, the frontcourt seems be suffering for a lack of heart.

Carlos Boozer is the exception to the Jazz heart issues. He’s a play hard leader with skills and intensity some coaches dream they could bottle-up and pass around like cups of water. Look for Paul Millsap, who finished third in ROY voting, to improve on the job and play at least ten minutes more than the eighteen minutes per game he played last year.

Behind the solid numbers of Mehmet Okur (17.2 ppg and 7.2 rpg) look for Jarron Collins picking his nose at the end of the bench and Kryrlyo Fesenko, a plus-7-foot ’07 second rounder to split time between the big club and the Utah’s D-League affiliate the Utah Flash.

FINAL OUTLOOK: Utah will make the playoffs but only go as far as Williams and Boozer can carry them.