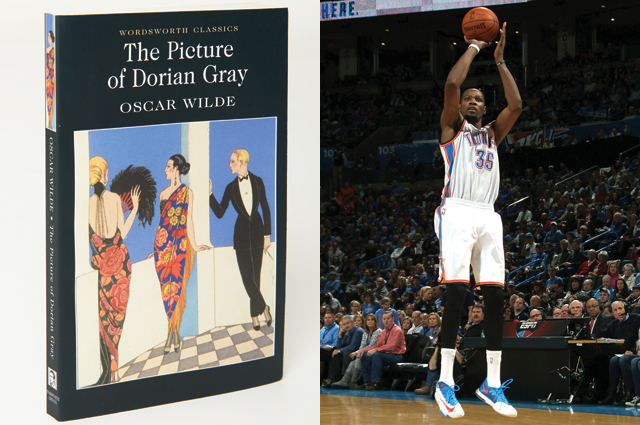 Kevin Durant, I know you’re busy with what could be an MVP season, but there’s always down time to dig into some literature. For you, I recommend The Picture of Dorian Gray by Oscar Wilde.

Dorian Gray was a handsome young man, a pure and innocent soul who had no enemies. You’ve been treated the same way for most of your career. Everybody loves Kevin, the anecdote for what’s sick with all of these selfish, me-first superstars. You have been happy to be the good guy who won’t sacrifice who you are as a person to become a self-absorbed win-at-all-costs driven by the doubters and the whispers seeker of validation. You don’t want to be the villain, you’re just happy to live a nice life as a good guy who can put the ball in the basket a lot. But oh Kevin, you have much to learn, as Dorian Gray did.

Dorian Gray started to learn that there’s another side of life, that there’s more fun in being bad, as long as you don’t get caught. In the novel, an artist paints a portrait of Dorian, which captures him at his most innocent. As Dorian begins to embrace the dark side, the selfish, fun side of life, the portrait starts to change to show his sins, but Dorian the man doesn’t change at all. He can get away with murder—literally—as well as some other horrible stuff, and it never shows. Only the portrait changes.

Kevin, we’ve seen the 48-, 54-point games. You love to shoot. You love the praise. Embrace it. Don’t worry about Westbrook, he will only take your spotlight from you. Reggie Jackson, Ibaka, Coach Brooks…they don’t know what true power is. Embrace your inner Dorian Gray. Shoot and celebrate. The consequences on other people’s lives don’t concern you. You can have the stats, the respect and the image. You can have it all.

Then again, the novel comes full circle and it’s a bit of a morality tale. Either way, there’s a lot to be learned from it for someone like you, someone who gets treated like a golden boy when you may have other desires. You will enjoy this novel immensely. Now, to find the artist to paint your portrait (and no, a cell phone selfie won’t cut it).