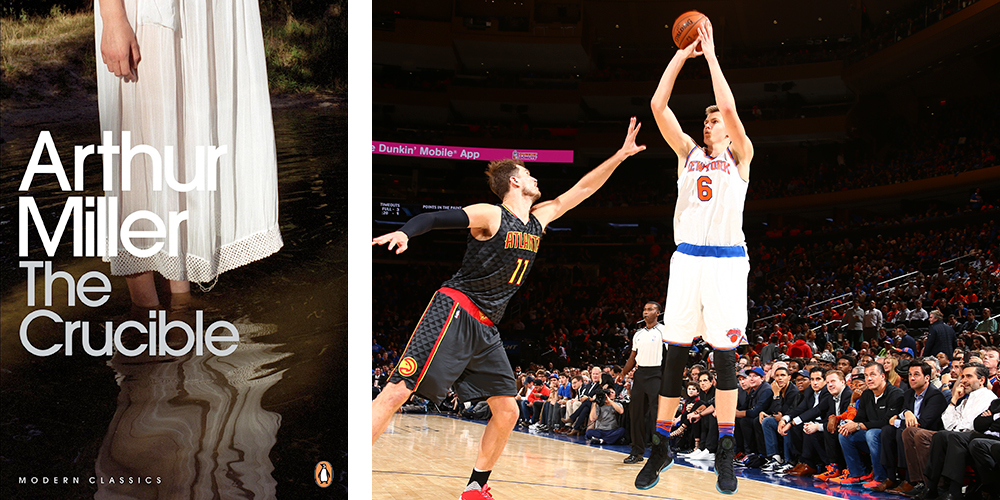 Kristaps, this column began when Phil Jackson was living in the bliss of retirement, and it began with an idea: if he’s not around to recommend books to NBA players, who will? We will! Then Phil came back to Harper Lee his legacy.

Over the summer, other media outlets made their moves. The Wall Street Journal interviewed some people and The New Yorker wrote a silly version of this column to try and make people laugh. We learned that Derek Fisher, channeling Phil, offered you a kid’s book called The Positive Dog and The New Yorker column offered The Vampire Lestat by Anne Rice with a joke about skinny Europeans. Kristaps, none of that is going to help you in your new world.

What will help you is The Crucible by Arthur Miller. The backstory is that Puritans left their homeland because of religious persecution and came to America. As soon as things start to go sideways, the witch hunt is on. Phil Jackson, your benefactor, likes to think of himself as a “purist.” Sounds like the puritans, the very same people who in this drama turn their peaceful world into full-blown hysteria. When the Garden was Eden? Your Knicks have a lot of work to do.

There’s a character in The Crucible who comes to town to clean up the mess, Reverend John Hale. He’s a spiritual healer, much like Phil. He soon discovers the environment to be so toxic, people turn on each other to save themselves. Welcome to the NBA, Kristaps! You will soon learn that when you play for the Knicks, every three-game winning streak turns into a fitting for championship rings, and every loss is doomsday and mockery. The problem you want to avoid is being the one they decide to blame. The people who will cover and dissect every move in your NBA career bear uncanny resemblance to our villain, Abigail Williams and her minions. Are you going to stand on your convictions like John Proctor? He is one of the great tragic heroes in all of literature.

The Crucible was written at a time when America was experiencing the Red Scare and McCarthyism. Arthur Miller wrote about a different era to make the connection, and hopefully as you read about America in the late 1600s, you don’t feel history repeating itself around you. Be careful, but also stay true to who you are as you navigate this difficult time.