Varejao Wants to Break Up With the Cavs 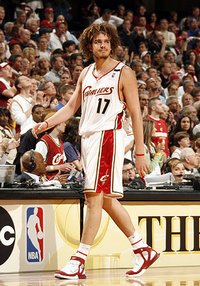 In large part thanks to LeBron James’s massive talent and indomitable will to win, the Cleveland Cavaliers were able to surprise everyone and make it to the NBA Finals last season. It wasn’t all LeBron’s doing, of course; he had plenty of help. Anderson Varejao was one of LeBron’s main helpers.

Able to take advantage of coach Mike Brown’s gritty, defensive approach, Varejao turned himself into an invaluable component on an elite team. And that’s when the trouble began.

Following a successful season where he emerged as a hard-nosed player with a bright future, Varejao demanded big money from the Cavs, and when they wouldn’t give it to him, he refused to show up for work. Frustrated with the lack of progress in the negotiations, Anderson Varejao now says he no longer wants to play in Cleveland.

“I just want to be treated fairly and I don’t think Danny [Ferry]’s done that.”

“I wanted to come back,” he said. “I love the fans and I really love my teammates. But there are others there that have made it very difficult. It’s gotten to the point that I don’t want to play there anymore. I’m just hoping for a sign-and-trade at this point.”

Varejao, who’s bitter that there are people on the Cavs making more money than he is despite their lack of production, went on to say that he’s willing to play in Europe and try his luck in the League again next year as a restricted free agent.

At this point, a divorce looks like the best option for both parties.