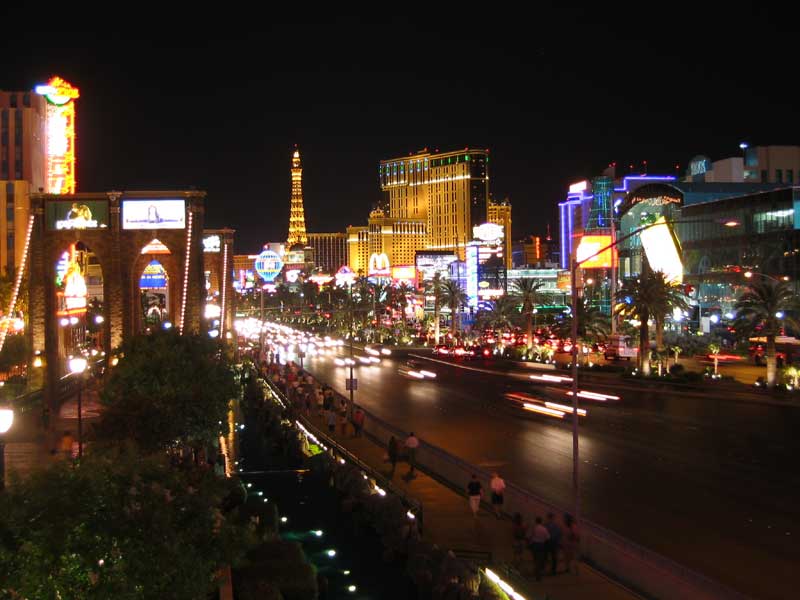 The thing that has generated the most talk amongst the visitors here revolves around transportation. For instance, we’ve been making jokes all weekend that none of us need to go to the hotel fitness center since we’ve been walking back and forth through and between all the hotels. Since all the hotels are humongous (no jokes they all have arenas in them and restaurants and giant open spaces where all the gambling takes place. The MGM has a lion habitat with real lions in it. No really it does) it takes anywhere from 15-20 minutes to get where you need to once you’re inside. I don’t mean hotel walking outside I mean once you are in it takes this long to get there. My leg muscles are getting a hardcore workout. The walking is doubly annoying because it’s so crowded. Saturday night trying to get from New York-New York to the MGM was absolutely a challenge. There were moments of stillness on the floor where people just couldn’t get by. It was annoying as hell but as long as you practiced patience you were okay. Many people however did not. There were several arguments and moment of tension where you knew if someone said one more thing there was going to be a fight.

Also so far I’ve been disappointed in the overall percentage of quality women. Only trifling women associate the lack of clothing with desirability. I’ve seen hordes and hordes of chicks looking like crap thinking that going bra-less is how you get to the next level. Not to mention several noticeably pregnant women who I guess didn’t want to have to hear about the parties from their friends convinced themselves that wearing small blouses (that even if you weren’t pregnant wouldn’t fit you) and exposing mad stretch marks is the move. I came out here expecting see dimes and even some quarters and instead I’ve seen girls that I wouldn’t messed with back in my financially struggling days of the ’90’s. Official looking women were out in droves last year in Houston but apparently not here in Vegas. Don’t get me wrong there are a lot of pretty girls out here (the misses is out here for business, so she is with me. So I’m not technically supposed to be commenting on this. She says she reads my blog so I guess I’ll see whether she just has been hustling me on that) but not in the masses I expected. It’s like 70-30 and the birds are winning in a blowout. Its also kind of disconcerting to see all the dudes dressesd like Young Jeezy and/or rocking furs when its obviously not cold enough but hey to each his own.

I also haven’t had a chance to gamble yet. I’m not much of a gambler anyway, well, except in the office. Where I stand with a record of 12-1 and that one loss was on a technicality (jones!) so I feel good about my chances regarding my co-workers. Here with all these professionals I need to be able to focus and I haven’t has the time. I’m not trying to sit down at one of the 50 dollar minimum black jack tables and end up having to sell my plane ticket in order to break even. I’ve been to busy (I’m here doing a feature for our next issue so that’s where my focus is) or too tired (I’m still on east coast time) to hit the tables. I’ll try again tonight but i make no promises.