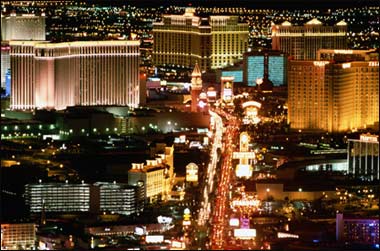 We’re all meeting up in Vegas for All-Star Weekend, n’est ce pas? That’s the plan. We’re all in agreement on this, right? OK, good. Here’s what you’ll need to bring with you on the big trip to Sin City.

-Sunglasses: Can’t be the only person on the strip not rocking these bad boys (especially at night!)

-Digital camera: Remember kids, a picture is worth a thousand words.

…And last, but certainly not least

-Heaping, toppling, disgusting amounts of money (and not just the singles for the gentlemen’s club, either): It’s looking like that weekend is going to be very profitable for Vegas businesses, perhaps a record-setting one:

“We expect this to be the biggest week in Vegas history, four nights of New Year’s Eve-type” crowds, said Branden Powers, marketing director of OPM Nightclub at the Forum Shops at Caesars.

According to reports, tickets for the big game on Sunday night (Feb.18) are going for anywhere between $4,000-$6,000 at places like E Bay. Tickets to VIP events are expected to cost up to $1,000. That is simply insane.

Vegas businesses won’t be the only ones out to make a quick buck either; NBA players want in on some of that action, too. Tony Parker and wifey are throwing a bash (Pure Nightclub at Caesars, $30 entry fee for men, $20 for the ladies), and Tracy McGrady and Puffy are throwing one at Jet ($50 to get in.)

LeBron James, however, might be the busiest guy that weekend. He’s going to participate in a Coca-Cola sponsored VIP event at Light nightclub inside The Bellagio, and is co-hosting a party at Tao on Saturday night with good friend Jay-Z.

Now, just where did I put that press pass? I know it’s around here somewhere…