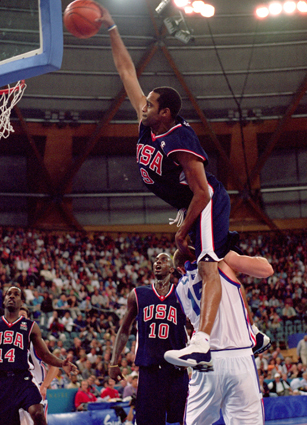 Athleticism generally falls into several categories: Below average, people with high body mass indexes and no desire to change; average, where you can run for about eight seconds before getting totally tired; slightly above average, where you have a gym membership and are just trying to get by, look good with a minimal amount of clothes on and not catch a hernia when you’re moving furniture up a five-story walkup. The latter category probably includes the largest percentage of the human pie. The last category, though, previously unmentioned, is that of the true elite who play for pay and exhibit feats on the regular that often defy the laws of physics or at least seem improbable to those of us under the heavy boot of gravity. There’s a big difference between regular athletic and that level of professional athletic. Truth is, that same difference—the one between the average Joe and average Pro—was equal to what happened in the ’99 season when Vince Carter came into the League. Strictly from an athletic vantage point, he made other professional athletes appear, well, unprofessional.

His first shoe was actually from Puma that was unofficially called The Vinsanity. Before long, Carter and the brand—more typically thought of as a source for lifestyle or running shoes—were disputing their contract, and VC played the ’99-00 season in a variety of kicks. One of those pairs—some beautiful two-toned AND 1s called Tai Chis—would be linked with him forever.

Some background: During the ’99-00 NBA campaign, the League was still recovering from the previous season’s lockout and looking for new faces to promote the game. VC, due to the otherworldly elegance of his in-game dunks and unmatchable-even-by-a-kangaroo hops, became one of these faces. The night the League really returned, though, and the night Carter really put his face—and a shoe—on the map, was February 13, 2000. As everyone now knows—and if you don’t, run to YouTube asap—that night’s Dunk Contest served as VC’s official coming out party. What everyone might not recall—though sneakerheads surely do—is Vince wearing a pair of red/white AND 1 Tai Chis during that dunking display. Vince’s performance—re-aired early and often on TV, and captured on camera by many—brought international recognition, and proof of the brand’s credibility as a performance outfitter, to AND 1.

Shortly after helping put Tai Chis on kids’ feet, VC signed with Nike and starting wearing the Shox (or more specifically, the Shox BB4). Though the line would have been popular regardless, Vince had yet another moment that propelled yet another shoe to stardom. This time it came on the international stage, at the 2000 Olympics in Sydney, where Carter jumped over—not around, but over, word to Doug Collins—Frédéric Weis, the French team’s 7-2 center.

VC helped popularize the Shox line—in addition to basketball there was also a cross-training and running shoe line—and it became one of Nike’s signature technologies during the first few years of the new century. Based on the science of kinetic energy, Shox Technology ensures, basically, that the energy that its wearer puts out won’t dissipate. In fact, rather, Shox returns that energy right back to the shoe and the wearer, thus providing somewhat of a natural spring-y feel.The components used to create the actual springs were at the height of cutting-edge engineering and also—and this is of almost equal importance—gave the shoes a futuristic design profile.

After the BB4 came Vince Carter’s signature shoes. The first one, which still utilized Shox, was simply called the “VC I” and each subsequent offering continued on the numerical scale, with each shoe a little different from the previous edition. What the shoes did well was utilize an innovative, new support system that provided light (at the time) footwear that still gave a sort of bounce effect. Who better to push a bounce-based shoe than Half-Man, Half-Amazing?

Much like Carter himself, the Tai Chi and the Shox lines aren’t quite the attention-getters they once were. But we think all three deserve recognition for pushing the culture forward and serving as a demarcation line between the 20th and 21st centuries.