Vinny Del Negro Has (Already) Declared Who the R.O.Y is 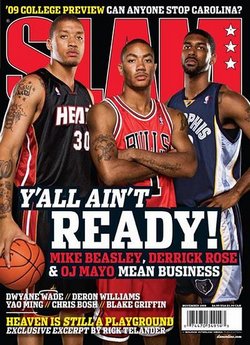 Vinny Del Negro is biased – as he should be – so it’s no surprise that he’s picking his guy, Derrick Rose, to win the Rookie of the Year Award. What’s awesome, is just how biased he is.

Try, a lot. From the Sun-Times:

‘‘There’s not even a conversation as far as I’m concerned,’’ Del Negro said Monday before the Bulls’ 102-98 loss to the New York Knicks.

‘‘Mayo’s having a great year, and Beasley is an incredibly talented player and is playing well. But no one’s played at the level Derrick’s played from the start to this point. Not even close in my opinion.’’

Of course, you could make the legitimate argument that D-Rose is the front-runner for the award, but to declare him the clear-cut winner (and at this point in the season) is beyond ridiculous.

All three rookie studs are putting up predictably solid numbers, but so far, only Beasley’s team is in position to reach the Playoffs. Slow your roll, Vinny, there is much basketball left to be played before this race is called.