Vlad Radmanovic and L.A. Will Not Miss One Another 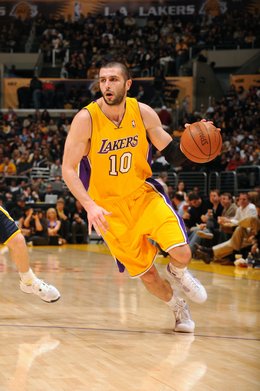 Vlad Rad, the man once famously called a “space cadet” by Phil Jackson, was shipped off to Charlotte over the weekend. The six-foot-ten forward didn’t exactly shed tears when told of the relocation plan.

“Here I’ll do what I do best. Being a Laker was a great experience, but it was also frustrating not knowing when and how I’d play,” Radmanovic said. “Phil’s system, great as it is, doesn’t give a role player much opportunity. For Kobe Bryant, it’s great. For Paul Gasol, it’s great. But role players don’t do much.”

Fair enough, but it might have helped matters if dude wore proper attire for basketball-related activities. So says the OC Register:

In his final Lakers practice on Friday, Radmanovic didn’t wear basketball shoes. He wore Vans – the low-top, slip-on kind of sneakers favored by skateboarders and, yes, snowboarders. Seriously. Or not seriously … because what undermined Radmanovic, 28, in every attempt to make his mark as a Laker was a lack of seriousness about his profession.

I wonder if Larry Brown has ever seen a pair of Vans?