Wade In The Water, Children 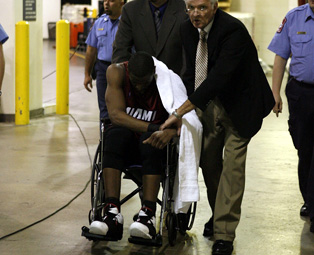 Anyway, Wednesday night I was laid out on the couch, simultaneously recovering from Vegas, preparing for the trip I’m on now and engrossed in League Pass, when I recalled that the Rockets and Heat were playing on ESPN. Shaq/Riley/Wade? Sure. So I flipped over and watched the second quarter, and watched as Dwyane Wade carried the Heat. The Rockets ran up a lead, but every time the Rockets appeared ready to blow it open, Wade would drive and get an and-one, or he’d nail a three or make a play on defense. Wade was single-handedly keeping the Heat in that game. Pat Riley was subbing guys in and out without much effect, and the Heat were so ineffective on the interior that Dikembe Mutombo was dominant.

(I need to do a whole post on the Rockets soon, too. What a weird team that is. Rafer Alston is playing huge minutes, T-Mac is doing his thing, and then there’s Battier and about 10 complementary guys that shuffle in and out. And they just execute the heck out of you with their offense. They’ve quietly coasted to 15 games over .500, without Yao and T-Mac for large portions of the season. This is officially my darkhorse playoff team.)

And then in the fourth quarter, Wade went down on a freaky play involving Shane Battier. It was initially hard to tell exactly what had happened — at first I thought he’d hurt his forearm — but after seeing a few replays it was evident that his shoulder was screwed up. How badly? Couldn’t tell, although the sight of Wade leaving the floor on a wheelchair intimated that it probably wasn’t good.

Today word dropped that Wade’s injury could require season-ending surgery, which would essentially be season-ending surgery for the entire Heat franchise. Sure, the Heat could probably get Shaq going and make the Playoffs (they’re the eighth seed as of today) but there’s no way they’ll be able to get out of the Eastern Conference without DWade.

There’s also a chance that Wade could rehab for six weeks and then return, which would bring him back just in time for the Playoffs. Wade’s still young enough that this probably won’t have long-term repercussions on his career, and you know very well that Riles is praying he can talk Wade into the rehab option. But again, there’s no guarantee they’ll make another title run even with Wade.

The Heat have been forced to ride Wade hard all season, and the way he’s played, particularly the last few weeks, has been admirable. But here’s hoping that in treating this injury, Wade does whatever is best for him. I know, you’re thinking that players should give their all for the team, should play hurt for the team. Well, we’ve already seen Riley take a break halfway through; will Wade follow Riles’ leadership and pack it in? The clock may be ticking for the aging Miami Heat, but DWade has a long time left to wow us. Let’s hope he doesn’t exchange any long-term security for a short-term chance to play in the Playoffs this year.

We’ve seen him fall down. Let’s hope this is yet another one he gets back up from.