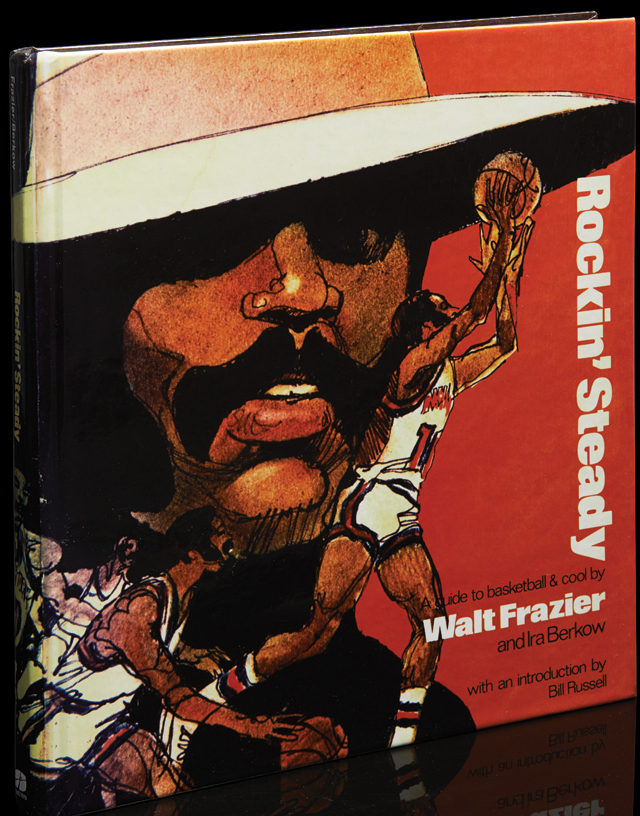 That’s why it’s great to look at the reissue of Rockin’ Steady, the 1974 book by former Knicks star Walt “Clyde” Frazier and prize-winning former New York Times columnist Ira Berkow. Steady is all about hoops and Clyde’s special viewpoint as one of the game’s greatest PGs and lockdown defensive experts.

It’s an oversized picture book with Clyde’s observations on everything from dunk shots (he doesn’t like them) to free throws (no need to practice a lot, since it’s all about nerves and confidence) to fast breaks (“Take the ball straight down the middle”).

Clyde led the Knicks to two NBA titles, and Knicks fans have been dreaming about new glory days ever since. Good luck. Frazier’s still bopping around the city and the game—he works as a color analyst for the Knicks, and he’s got a part interest in a restaurant named “Clyde’s”on 10th Avenue in NYC. He’s still stylish with his clothes, and he still brings that aura of  “Yeah, man, I know what’s happenin’” nonchalance with him. Cool is real, you know. Clyde wasn’t the most physically gifted—slow, small hands, average jumper—so he compensated with it.

“I had to make up for my physical drawbacks by playing it cool,” he says. “I play so cool now that I hardly sweat on the court.” But his mind always worked in overdrive, and he had a reason for his cool, the posture of blankness, the suppressed emotions, with knowledge abounding.

“Cool is a quality admired in the black neighborhoods,” he explains. “Cool is a matter of self-preservation, of survival. It must go back to slave days, when oftentimes all a black man had to defend himself was his poise. If you’d show fear or anger, you’d suffer the consequences.”

Times have changed. Indeed, the famed World Trade Center Twin Towers were dedicated that spring 40 years ago, and disco, just a club beat with bass notes pounding faster than your heart has spread into the EDM sound blanketing the world. And cool? Well, there aren’t many hoopers playing that way anymore. Maybe there just aren’t any more Clydes. Believe that.