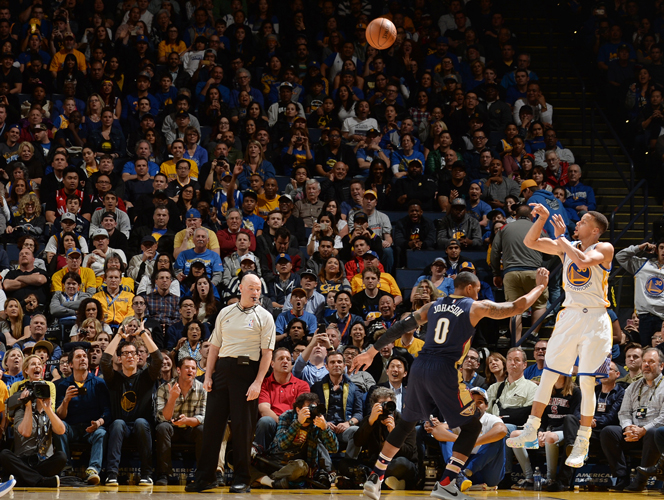 Dirk Nowitzki’s 23-point, 11-rebound double-double put the Charlotte Hornets’ League leading seven game winning streak to rest on Monday night. Chandler Parsons contributed a team-high 24 points to go with his 9 rebounds, and three more Mavs scored in double-figs in the win. Kemba Walker finished with the game-high 25 points and 9 assists in the loss.

Led by 20 points from Justise Winslow and an 18-point, 10-rebound double-double from Hassan Whiteside, the Miami Heat kept things in control versus the Denver Nuggets on Monday night. Vet Dwyane Wade poured in 19, and rookie Josh Richardson got up for a slam too.

Doug McDermott went for a perfect 7-7 in the first half against the Toronto Raptors on Monday night, before he finished with a team-high 29 points. Four more Bulls added in double-digits to take care of Kyle Lowry and DeMar DeRozan’s combined 60 points. Even Drake tried to help shake the Bulls’ focus, and although his shenanigans may have assisted in getting that five-second violation called, the Raps came up short.

Blowout No. 1. The Washington Wizards had absolutely everything going their way Monday night, as they cruised to a home victory against the visiting Detroit Pistons. John Wall did a little of everything, finishing with 15 points and 12 assists, as six more Wizards finished in double-figs, including Nene who tallied a game-high 20.

Blowout No. 2. Houston dominated the entire game, leading by as many as 53. FIFTY-THREE. The Rockets shot over 50 percent from the floor and held the Grizz to just 29 percent. Nine out of the 12 Rockets’ players who saw minutes scored in double-figures, with Donatas Motiejunas leading the way with 18.

Blowout No. 3. Russell Westbrook finished with his 12th triple-double of the season: 17 points, 16 assists and 10 rebounds (watch up top). Enes Kanter added in a season-high 26 points, and Kevin Durant contributed 20 to help the Thunder end their two-game losing streak. Damian Lillard finished with 21 for Portland in the loss on the road.

With the game tied at 104 and the clock winding down, Mirza Teletovic released a 3-point attempt. He nailed it, putting his final point tally to 21, as the Suns earned their 18th win of the season. PJ Tucker led Phoenix with 23 points and 12 rebounds. Ricky Rubio finished with a 13-point, 17-assist double-double, and Zach LaVine (28 points) and Andrew Wiggins (22 points) combined for 50 points in the loss.

Rodney Hood finished with 28 points, and Shelvin Mack nearly completed a triple-double (17 points, 10 assists, 7 boards) to lift the Utah Jazz over the visiting Cleveland Cavaliers on Monday night. LeBron James finished with 23 points and 12 boards, but that wasn’t enough to put away the hometown Jazz.

Happy Birthday, Steph! With their victory Monday, the Warriors became the fastest team in NBA history to reach 60 wins. Despite committing 10 more turnovers than their opponents, the Dubs led by as many as 29 points in Oakland when the Pelicans came to town. Stephen Curry finished with a game-high 27 points, and Draymond Green added a 14-point, 12-board double-double to silence Anthony Davis (22 points, 12 rebounds) and his New Orleans squad.