Game of a Lifetime 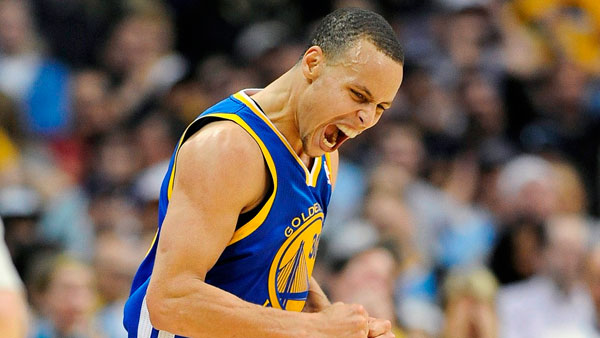 After blessing SLAMonline with the nERD Power Rankings throughout the season, our guys at numberFire are back to help us look at the postseason in an analytics-based way. So what do the algorithmic models say about Golden State’s amazing shooting exhibition in Game 2? NumberFire’s Chief Editor is here with the answer.—Ed.

Forgive me for a moment, but I’m still adjusting my eyesight after being awestruck by the radiant beauty shining from Stephen Curry‘s Game 2 shooting stroke.

There is no other way to put it. As a team last night, the Golden State Warriors shot 51 for 79 from the field and 14 for 25 from long range. Their effective field goal percentage (eFG%), which takes into account that three-pointers are more useful than two-point shots, finished at .734. Taking a look at the shot chart is like soaking in a Christmas tree: the little dots of red are swallowed up by the green that seems to be everywhere.

But finishing with that type of game isn’t just brilliant: It’s incredibly statistically unsound. Warriors fans hoping for a repeat in Game 3 are about to have their hearts torn into pieces, because David Lee will come back to play twice before we see that type of shooting performance again.

The Warriors averaged .506 eFG% during the regular season, good for 10th in the NBA. The leader in the category, naturally the Fighting LeBrons, only averaged .552 eFG%, and that was the best mark in about three seasons. On a game-to-game basis, shooting above even a .700 eFG% is an extremely rare occurrence.

In fact, only three teams have topped .700 eFG% during the regular season, and it took extraordinary efforts against weak defenses to do so.

You read that right: the Warriors shot .021 eFG% better last night than any team did during the entire regular season. That’s some good hustle.

Those supposedly sweet-shooting Warriors have barely even gotten to the .600 eFG% benchmark this season. Golden State’s previous 2013 season-high was a .625 eFG% against the Detroit Pistons on March 13, a game where Curry finished with 31 points and shot 5-7 from long range. In total, the Warriors shot above .600 eFG% in five of their 82 games this season, and only one of those games came against a team in the top half of the League in defensive rating (Boston on December 29).

Against Denver, even hitting .600 would be surprising. The Nuggets didn’t have Grade A lockdown defense this season, but their .493 eFG% allowed to opponents did rank No. 13 in the League. Their 105.1 defensive rating, which measures the total points a team allows per 100 possessions, sat in 11th. Especially with a healthy Kenneth Faried back for Game 2, allowing a Golden State offensive onslaught was the last thing on their minds.

But the onslaught raged on, with the Warriors hitting from all spots on the floor. In particular, Nuggets defense simply couldn’t rotate quick enough to defend kick outs to the corner; the Warriors shot a perfect 7 for 7 along the baseline from at least 17 feet out. Five of those seven makes were threes: two by Curry, two by Klay Thompson, and one by Richard Jefferson.

So just how unlikely was a shooting game of that caliber, especially against Denver’s above-average defense? I had numberFire Chief Analyst Keith Goldner run the numbers, and it turns out that Golden State fans may be waiting a while before this type of performance happens again.

Given Golden State’s season-long averages, they had a 0.36 percent chance of shooting .734 or higher. That means that if the Warriors and Nuggets were doomed to an eternity of playing basketball games, the Warriors would shoot at least .734 only 36 out of 10,000 times. Given an 82-game season, that’s an average of once every 3.39 years.

In order to take down Denver again in Game 3, the Warriors may have to look elsewhere for an edge. After last night, their series win odds jumped from 13.7 percent to 32.5 percent, so the comeback trail isn’t impossible. It will just take some work and possibly another efficiency outlier or two.

I may have been blinded by that shooting performance, but I can see well enough to know that the numbers tell the story. And the Warriors just had the game of a lifetime.