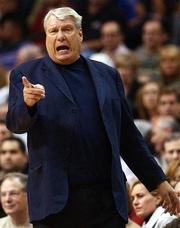 Can you believe that the regular season is only eight days away? That’s right, only eight days away from the League’s 61st year. Before that jumps off, some of the best hoop writers from around the web would like to say a thing or two about their respective teams, and we’re more than happy to give them the floor.

SLAM: Your team just hired Nellie as head coach again. Was this the right move for the organization to make?

Atma Brother #1: Right move? It’s the ONLY move! Now we just need to trade for Chris Webber and pick up Latrell Sprewell to completely end the curse that has haunted this organization for over a decade.

But make no mistake, this is not a Don Nelson team. The backcourt can’t hit free throws, the frontcourt isn’t very athletic, and the hole team (pun intended) just doesn’t fit well together. Last season it was brick city at the Oakland Arena every night. It’s going to drive Nellie absolutely nuts watching these guys miss easy shots after coaching sharpshooters like Dirk Nowitzki, Steve Nash, and Chris Mullin. Nellie might tell the media and the fans that he likes this team, but that’s just his poker-face. Expect a lot of changes before the trading deadline in February.

Fantasy Junkie: Outside of a trade for a superstar, the hiring of Nellie was the best move the Warriors could have made. He will give the team instant credibility and a new identity. For the past 12 years, the Warriors have been known as losers and considered the joke of the NBA. Nelson’s going to make people respect the Warriors no matter what. Even if it’s only for a few years, he’s going to be the catalyst for change in this organization. When he leaves the franchise it will be headed in the right direction as well.

YaoButtaMing: Of course! At this point we’ll even take a successful high school coach. Anything to break this losing streak of 12 seasons. Desperate times call for desperate measures.

With the amount of talent on this squad, I think it’s fair to say that this team underachieved last season. What areas do they need to improve on to make the jump to the next level?

AB: Talent-wise last season the Warriors should have been competing for the 7th or 8th spot with Pacific Division foes Sacramento Kings and LA Lakers. Despite what the organization might want you to believe, the Warriors are not oozing with talent. To make the jump to the next level, first and foremost the Warriors need to upgrade the frontcourt. The backcourt can run-and-gun, but the frontcourt isn’t athletic enough to keep up. That’s the main flaw with this roster as presently constituted. Ike Diogu is a flat out stud in the post, but aside from him there’s virtually no low post presence on this squad. Ike’s nasty down low, but it might be asking too much of a second year player to shoulder the entire responsibility for scoring easy buckets down low. He’s had some trouble grasping Nellie’s game plan too, so his minutes might be limited in the early going.

FJ: Everyone talks about the free throws and shot selection as places where the Warriors can make the biggest improvement, but the real place for change is in leadership. Last year, Monty was still learning and never had complete control over the team. Also, Baron was expected to be the floor general, but never stepped up in that role. The lack of identity and direction killed the Warriors’ season more than anything else. Things are looking bright with Nellie here to take charge on the sidelines. The only thing left is for either JRich or Baron to step up and be the leader on the court.

YBM: I personally think it starts at the top. We need to provide a winning environment and bringing in Nellie on helps. Last year Coach Montgomery could not control some of the players and simply could not get the job done.

You follow this team very closely. Would you say that Baron is the right guy to lead them (especially when you consider his injuries), or should they try to move in another direction (point-guard wise)?

AB: Even with his faults, Baron Davis is at worst still a top 8 point guard. If the Warriors foolishly tried to move him right now, they wouldn’t get fair value (see: Hornets, New Orleans). There’s really no way for the Warriors to go point guard-wise, but down if they traded him. Moving in another direction just isn’t a viable option at the moment. Baron’s major weaknesses are bad luck with injuries, poor shot selection, and lapses on the defensive end. Boom Dizzle’s looking slimmer, so hopefully the injuries will be greatly reduced this season. With Nellie-ball, Davis won’t have to shoulder as much of the load offensively, so expect those wild shots to dramatically decrease. If BD’s not bringing it on the defensive end against scoring point guards, new starter Mickael Pietrus can switch over and put the clamps on them.

FJ: Flat out, he’s going to have a monster season under Nellie. He’s reportedly lost 15 pounds since last season, which should not only decrease the potential for injuries, but allow him to be quicker and keep his stamina up. Last year was a disaster for most everyone on the team including him. With Nellie back, everyone is starting with a clean slate, so this year I expect to see more ‘All-Star Baron’ rather than the aberration that was last year.

YBM: He is and will be the right guy. People are giving up on him too quickly, but if you look back to the beginning of last year when the Warriors were on a tear, everyone thought he was the answer. He can still do it as long as the coaching staff works with him on finding the right role.

Speaking of health. What does the future hold for the freakishly athletic Jason Richardson now that he’s had some cut-up done on his knee?

AB: This is an excellent question that has fallen below the radar of almost everyone, with one of the exceptions being our man Sam Rubenstein from the SLAM squad. Warriors Nation and the organization don’t seem too worried about JRich recovering. Given Jason Richardson’s drive and work ethic, I can see why. My (hopeful) guess: JRich will be fine. It’s supposedly a minor surgery similar to what Kobe had before last season. 81 points later–what injury?

FJ: He’ll be the same high-flying, high-scoring two-guard we’ve all come to know and love. But his knee is a concern and maybe we don’t want to jinx it, but it’s the one thing nobody really talks about or wants to talk about. Hopefully his return is not delayed and he comes back 100% for the start of the season. We’re all crossing our fingers, but it’s scary to think what this team would be without him, because he is, without a doubt, the heart and soul.

YBM: He’s a warrior… no pun intended. He’ll be fine. With some of the young guys showing promise and Baron back into form, it could ease the pressure on JRich early in the season. Remember, he’s been carrying the load for the whole Bay Area for quite some time.

Alright, enough foreplay, how will the Warriors fare this season?

AB: Honestly, I just can’t say. Again, I would be absolutely shocked if the Warriors don’t make a few trades before the February trade deadline. It’s no secret that Chris Mullin didn’t want to come into this season with both Mike Dunleavy and Troy Murphy as starters. With a few upgrades this team will end the 12-year losing drought. Without a few trades this team will barely scratch and claw its way to the 8th spot. But if the BoomRich backcourt misses significant time to injuries, this squad is headed for the Greg Oden or Yi sweepstakes, which actually might not be that bad considering the below average talent level on this roster relative to the other Western Conference squads. No matter what happens it’s going to be a fun, fun season for Dub Nation! That’s saying a lot for a fan base that has been deprived of any playoff action for over a decade by the worst ownership and management in the entire league.

FJ: Warrior fans are thirsty for the playoffs and I’m predicting the 12-year drought will end this year. They’ll squeak in as a 7th or 8th seed by using the uptempo offense and mismatches that Nellie has mastered. He was brought in here to do one thing: win. He’ll do that.

YBM: I’m looking for the Warriors to finish anywhere from 6th to 8th in the West. If they can adopt that Nellie run-and-gun mentality this could be one of the most exciting seasons in a long time for the Warriors.