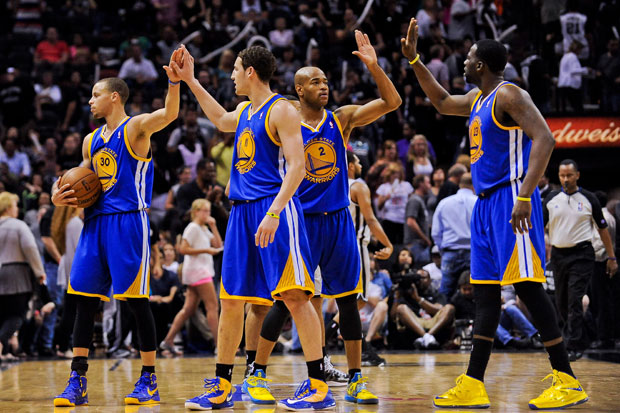 After blessing SLAMonline with the nERD Power Rankings throughout the season, our guys at numberFire are back to help us look at the postseason in an analytics-based way. So what do the algorithmic models say about the Warriors’ amazing Playoff shooting exhibition? NumberFire’s Chief Editor is here with the answer.—Ed.

They did it again. This is starting to get old after a while. There are only so many times I can type “(Insert Warrior here) went off in Game (insert number here) and shot an insanely high (insert ludicrous percentage here) from the field en route to a Warriors surprise (insert dominating performance or collapse) here.”

Game 2, it was Klay Thompson. Game 1 was Stephen Curry. Game 3 will be Festus Ezeli for all I know. After a while. these games start to blend together a bit.

But that’s what happens when you shoot as well are the Golden State Warriors have, I suppose. Through eight Playoff games, the Warriors have shot a .551 effective field goal percentage (eFG%), easily the best of any Playoff team. After shooting .556 eFG% through the first seven Playoff games, the Warriors dipped only slightly last night, shooting .518 eFG% against the Spurs. The Spurs: you know, that team that only allowed opponents to shoot a fifth-best .480 eFG% against them this season.

The Warriors have been able to dominate our preferred shooting figure by virtue of a 40.7 percent three-point rate so far these Playoffs. And considering they have shot 29.6 percent of their total field goals from behind the three-point line, that’s not a bad percentage to have. In fact, it has helped them become the third-best Playoff shooting team of all time.

Wait, all time? Yes, I said all time. One look at the stats, and it shouldn’t be that surprising how they knocked off the Nuggets and was a late collapse away from being up 2-0 on the Spurs.

Michael Jordan’s Bulls may have dominated opponents, but they won through a combination of defense and rebounding just as well as shooting. Hakeem’s Rockets made a bunch of buckets in their mini-run, but they never shot more than .537 eFG% in a playoff run. The Stockton/Malone Jazz or the Kobe/Shaq Lakers or even last year’s Heat team? Please. These Warriors have them all covered in the pure shooting category.

In order to find a challenger to the Shooting Idol Throne, the Warriors would need to travel back to the land of the B-52s and Bobby Brown: the ’89-90 NBA season. That Playoff run, in May 1990, Larry Bird and Kevin McHale’s Celtics flamed out in the first round against the New York Knicks in five games. But they did it in style: their .558 eFG% in those five games still remains the highest effective field goal percentage for a Playoff team since the NBA/ABA merger. McHale himself shot a .616 eFG% in that series, averaging 22 points per game.

For a team that actually won a round, you’d have to head back even further to Magic’s 1985 Lakers squad. That team, who only lost four total games en route to the title, shot .552 eFG% total behind James Worthy’s ridiculous .624 eFG%. Of the 10 Lakers players who played at least 10 minutes per game, only Bob McAdoo (his next-to-last season) shot under .500 eFG% for the Lakers.

The Warriors are in a league of their own with both of those teams. Just check out the NBA Playoff teams that shot at least .535 eFG% throughout their Playoff run since the NBA/ABA merger in 1976. Only three have topped the .550 eFG% mark.

Now remember who the Warriors have done this against—the Spurs finished the regular season fifth in defensive eFG% at .480, and the Nuggets were an above-average 13th at .493. The Grizzlies and Thunder both ended the regular season in the top three of defensive eFG% (the top three went IND-OKC-MEM), but given their current streak, doesn’t it seem like the Warriors could do this forever?

Looking to the Future

You see, statistics has this funny rule called “regression to the mean.” No matter how well you shoot over a certain stretch, even as long of a stretch as eight games, a team is much more likely to shoot their overall average percentage than continue the hot streak. Everybody cools off sometime.

Given those odds, Golden State isn’t nearly as likely as Warriors fans would hope to keep up their winning ways. Remember, the Spurs should pick up the shooting on their end as well; their .531 regular-season eFG% finished second in the NBA behind the Fighting LeBrons. They’ve been better at conserving turnovers and just as good at collecting offensive rebounds this series as well.

Our odds machine agrees. We have the Spurs as the clear favorite going forward, giving them a 66 percent chance to win the series based on the current 1-1 tie.

San Antonio holds nearly a one-in-five chance at winning the final three games of the series and heading on to the Western Conference Finals. That’s the downside of the Warriors’ strategy—shooting a lot of threes also leaves you susceptible to cold streaks at any time.

Sure, the Warriors have been great these playoffs. They may even have been historic. And if there are a rash of Bay Area high school graduates named Stephen in 18 years, I wouldn’t be surprised. But don’t expect this type of run to continue—the Warriors shooting has been an outlier rather than indicative of something bigger.