Was LeBron Wrong to Dunk a (Plastic) Baby? 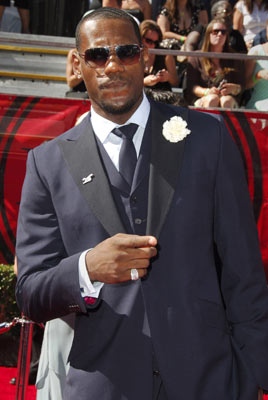 -Personally, I couldn’t care less (because it was, after all, a stupid stunt for an even stupider television event), but Bill Livingston of the Plain Dealer is ticked off that LeBron James slam-dunked a baby doll during the ESPYs.

In trying to make fun of his “King James” image, he created a worse one in a matter of seconds.

Shouldn’t anyone be in hot water after slam-dunking a baby?

-Kevin Garnett was in L.A. this week…but only to watch tennis. Keep the dream alive, guys!

-The Spurs have re-signed the fantastically named Fabricio Oberto. It’s a three-year deal worth $10.5 million. It should come as no surprise that San Antonio has all 12 crew members from the current championship team returning next year. I fear for the rest of the NBA’s safety.

-Is Eddie Jones on the move?

Word is Eddie Jones, who has been awaiting a Heat offer, again has been considering overtures from Dallas (like he did in February).

-And because the guy’s simply not getting enough media attention, LeBron is going to be hosting the season premiere of Saturday Night Live. (Thanks to the ruggedly handsome Ben Collins for the tip.)

(Speaking of Collins, here’s his unique take on the matter: “Here’s to hoping [LeBron] kills that Debby Downer b*tch.” A gentleman that Collins, through and through.)