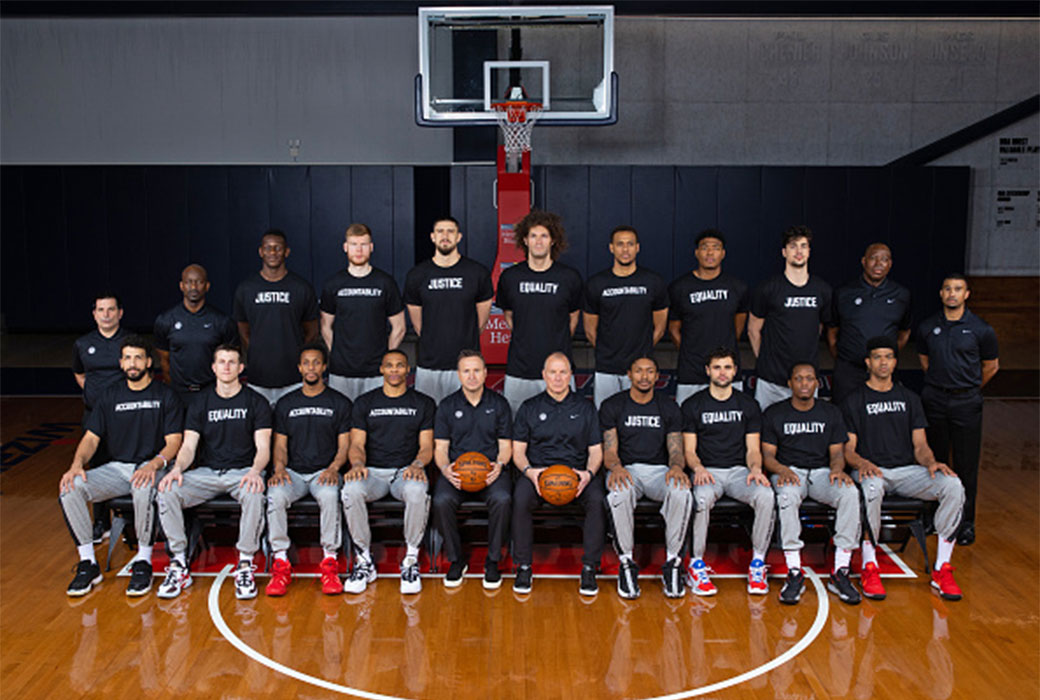 In most seasons, every NBA franchise takes part in a team photo that most fans don’t even notice unless it’s to remember past title teams or scouring the internet. The Washington Wizards made sure that this year’s team photo was one to remember by making a statement.

The players replaced their team jerseys with black shirts that read “Equality,” “Justice” and “Accountability” on the front. Then, the team released a behind-the-scenes video production documenting the process.

We ditched the jerseys at this year’s team photoshoot and decided to make a statement.

The Wizards also took a photo with the team’s COVID-19 medical workers, thanking them for keeping the team safe through a difficult season that was almost wrecked due to numerous players in COVID-19 protocols and missed games due to suspensions.

Our testers have been the MVPs of our season. 🙏

We cannot thank them enough for everything that they’ve done to keep us safe this year. pic.twitter.com/nfo84SMfLu

Russell Westbrook, who executive produced the History Channel documentary “Tulsa Burning: The 1921 Race Massacre” premiering on May 30th, spoke on the importance of using this platform to make a change.

“I think the significance of this year is bigger than basketball – this year, overall, has been difficult for everyone,” Westbrook said. “I think it’s amazing how we as a team are doing something a little different, having shirts that actually have substantial meaning behind it. I’m grateful to be a part of the first team to do something like that since I’ve been in the league.”

As a sign of solidarity, the coaches and staff members also wore shirts in the photos as well. General Manager, Tommy Sheppard voiced the importance of the team concept, via NBA.com.

Back in June, multiple players for the Wizards and the WNBA’s Washington Mystics took to the streets of Washington to support the Black Lives Matter movement on Juneteenth to march with protesters.