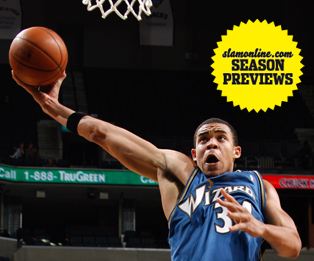 The Washington Wizards conclude our Southeast Division previews. You can read past previews here.

There are very few teams I pity. The Knicks — despite my Rockets and Bulls fandom — get some sympathy. The organization formerly known as the Seattle SuperSonics would perhaps make the cut; their forlorn fans at least deserve some love. But no team deserves a hug Ari Gold style like

Last season the team fought to find an identity without their franchise player, Gilbert Arenas. What resulted was, in a sense, a heroic effort by players like Roger Mason and Antonio Daniels. Caron Butler and Antawn Jamison did more than their share to carry the load as they both padded their stats, Jamison also padding his checkbook. In the end, it was too much for a team decimated by injury, and the Wizards lost a brutal first round series to the Cavs in six games.

For quite some time, the Wizards had people saying, “If they could just get their stars all on the same floor healthy, watch out.” Well, there is a better chance of Harry Potter and David Copperfield dropping alleys to each other this season than the trio of Caron Butler, Gilbert Arenas, and Antawn Jamison playing 100 percent healthy.

The 2008-09 season is off to a painful start for Washington but that won’t stop us from analyzing every last shredded knee on the Wiz. (Michael Jackson in idiotic scarecrow outfit not included.)

Somebody cue the “One Shining Moment” song because, aside from former Nevada Center JaVale McGee, the Wizards offseason moves seemed to have been inspired from old Final Four YouTube clips. Both Dixon and Brown had their illustrious runs in March Madness, but those days are long gone. This, my friends, is what happens when you throw $150 million at two players in desperation. In Washington’s defense, there is no way fans would have bought into this team had owner Abe Pollin not stuck to his word. Maybe Agent Zero can dress up as the Ghost of All-Star Past for Halloween.

Juan Dixon will stand in as the backup to Antonio Daniels until Arenas comes back in mid-December. His 5 ppg for Detroit and Toronto last season was below his career 8.9 average, but on the bright side, he shot nearly 42 percent from three. Dixon also can come in handy for pep talks sometime in November when the wheels start to fall off. He can flash his NCAA title ring and say, “Forget the NBA Finals, I bet none of you fools have one of these.” And he’d be right.

Dee Brown will bring intensity as a backup to the point guard position, something he so often did at Illinois. Unfortunately, he won’t bring much else to the team. Brown failed to average more than 2 points in his single season in the League. He isn’t the answer to issues at the point with Arenas out. Now the other Dee Brown, the former Celtic who pumped up his Reeboks and slammed his way into fans’ hearts, could at least provide some nice halftime trampoline dunk ideas for the Wizards mascot, G-Wiz.

JaVale McGee, the 18th pick out of Nevada, represents the biggest key pickup potentially from a long-term standpoint. Let’s face it, Washington can’t turn to linebacker Brendan Haywood forever, or apparently in the near future. Haywood is expected to be out for to six months following wrist surgery. McGee is undersized but will fill-out in time. He’s a lengthy defender who can step out and hit the mid-range jumper. In a few years McGee could turn into a significant member of the Wizards starting lineup.

The loss of Roger Mason seemed like a wise business move. Why keep three point guards that need time to be productive, right? Well, here’s the thing. When your “starting” point guard has undergone more surgeries recently than Diana Ross, you probably need all the insurance you can get. (And the Wiz movie reference circle is complete.) Mason helped spread the floor, averaging almost two three pointers a game in only 21 minutes at a .398 clip. Now, he would serve as a much needed backup to Antonio Daniels. But that chance has passed and Mason is off to San Antonio, the island of bastard backups. The over/under for him on titles is 2. The over/under on Arenas blog posts where he blasts Washington’s management for letting Mason go? About as high as Josh Howard.

The true loss, however, comes in the form of Gilbert Arenas. Hibachi let the doctors slice and dice his left knee for the third time in September, something that probably put owner Abe Pollin as a front-runner for a remake of the old Saturday Night Live “Oops, I crapped my pants” skit. Arenas is the face of the franchise. I love his game and personality. Can it be frustrating? Absolutely. But the NBA is at its best when there are entertaining personalities present. There is a reason no large groups outside of San Antonio are snatching up Tim Duncan jerseys off the rack. The loss of Arenas is a blow to both the ability of Washington as a basketball team as well as the marketability of the Wizards as a whole.

On paper this team doesn’t look bad. But then again neither did the 2007-08 Bulls. Still, Butler and Jamison are a duo that any team would be hard pressed to match, if both can stay healthy. Hmm, haven’t we been saying the same thing about Yao and TMac in Houston for years? Jamison already bruised his knee and had his teammates holding their breath. For D.C.’s sake, they better hope Caron and Antawn don’t catch the injury bug that’s spreading faster than a Lil’ Wayne mixtape. There is simply not enough offensive point distribution among the team.

Speaking of lack of scoring…DeShawn Stevenson may chatter and defend with the best of them, but 11 points per game for a shooting guard on 38.6 percent shooting isn’t much to pop off about. At what point do you look in the mirror and say to yourself, “Damn it, Raja Bell is scoring more than me. Enough is enough.” Then in typical DeShawn fashion, you can wave your hand in your face. In Stevenson’s defense, the ball should go through Butler, Jamison, and Arenas when healthy every time they go down the court.

Antonio Daniels should continue to fill the void for Arenas. Nine points and five assists per game on this team will be adequate. Besides, who is going to threaten him for his job? I wouldn’t be surprised if coach Eddie Jordan’s philosophy wasn’t, “Get Caron and ‘Tawn the ball and get the hell out of the way.”

An element of toughness and points will be missing with Brendan Haywood out. When he wasn’t focused on putting players like LeBron James in a figure four leg-lock, he was getting double digits in points to go with his seven rebounds a night. He’s not a smooth scorer, but he serves his purpose. The center by committee approach, led by Etan Thomas probably won’t equal that. But on a sidenote I will say this. I love Etan’s poetry. If you get a chance to read his collection of poems, “More than an Athlete,” I would strongly suggest you do. You’ll be a better person for it.

The standout player on this bench is Nick Young, a shooting guard who has been on my radar long before he and his USC teammates stomped Kevin Durant’s Texas Longhorns two seasons ago in the NCAA tourney. Young is being brought up slowly, but he’s money from behind the arc, shooting at a 40 percent clip. He also has the capability to nip at DeShawn Stevenson’s heels. It is only a matter of time before Young starts getting more playing time.

The rest of the bench will get their share of the minutes, In fact, they should all get matching tattoos that say M.A.S.H. on their arms in honor of how much work they will be putting in. Most subs only come in to stop figurative bleeding. Darius Songaila, Andrey Blatche, and potential bloomer Oleksiy Pecherov won’t be so lucky. Eddie Jordan has been raving about McGuire, a good sign for a team that is dangerously low in depth at the small forward position.

At this point, Eddie Jordan should have a season of “Survivor” named after him. The man seems to always find a way to keep his team above water. It won’t come quite as easy this season in a much improved Eastern Conference. But I’m not going to bet against a coach who has the longest tenure in the East. He hasn’t been able to get his players to respond in the playoffs but that could be largely due to the fact that they’ve expended every ounce of energy in order to even make it into the first round. I’m still waiting to see Jordan get over that 50 win hump, something he has been unable to do heading into his eighth year as a head coach. But then again, 43 wins lately has been enough to make you at least a 6 seed in the East. In the West, such mediocrity would mean Jordan would be looking for a job.

The future looks dark until December when Agent Zero will step back onto the court. With Arenas at full strength the Wizards can give nearly any Eastern team a fight in the playoffs. Without him they will be in a fight for their playoff lives. Forty-two wins is a possibility for Washington. Of course, it’s possible that Michael Jordan will pop out of the G-Wiz outfit and lead the team to the NBA Finals. Anything is possible. Is it probable? Umm, no. Look for the Wizards to fall anywhere between the 37- to 40-win range unless we see a return to the greatness that Arenas had not so long ago. And if Butler or Jamison go down? Then welcome to the lottery, Wizards fans. My advice to you is not to pick anybody associated with Kwame Brown, better known to my friends as Stripe from the “Gremlins” movie.

In 2006, Gilbert Arenas appeared in an adidas commercial that highlighted the efforts of his teammates. “It Takes Five,” was the name of the ad, a message that Arenas is learning the truth of more than ever.