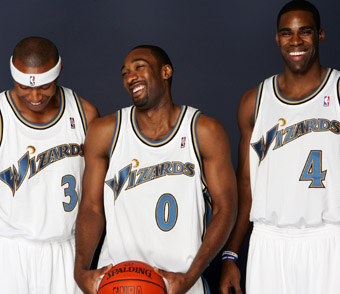 I know Gil probably thinks he’s arrived. He’s on the cover of the new NBA Live, he’s got a signature shoe that’s getting an elaborate roll-out across the country, he was an All-Star starter, his blog is one of the most popular (sports or otherwise) on the Internet – he’s getting’ it. But you haven’t truly arrived, specifically as an NBA super-duper-star, if you still haven’t been named-dropped on a hip hop cut. Feel me? Every star on Gil’s level or above (T-Mac, Kobe, Shaq, KG, Bron, Wade, Melo, Ray Allen – even Steve Nash and Tim Duncan) has had their names spit out of the mouth of an emcee. How can this be? Somebody needs to save dude, soon. I’m voting a sports fanatic emcee like Pharoahe Monche or a West Coast dude like Snoop. The fact that no rapper has deemed Gil relevant enough to drop his name should concern Agent Zero, but not as much as his squad and the newly competitive East.

Gil believes that, when healthy, the Wiz are the best squad in the East. He said so, in our magazine. He even forced Lang to go against his hunch and pick them to finish atop the South division (I agree with Gil there. I think Lang is buggin’ with his gut-feeling on Miami). Gil’s logic is that they score too easily for anyone in the East to stop them. That’s cool and all, but it’s continued to be the other end of the floor that has hindered the Wiz from ever REALLY competing for the Eastern crown.

This season, however, the Wiz actually do look stronger, tougher and more poised to compete; and, like season’s past, it’s because GM Ernie Grunfield has made prescient, calculated, nuanced tweaks to the roster and organization. The most important move this off-season was not the signing of Andre Blatche (who may be on the verge of a breakout) or drafting the polished Nick Young and hulking Oleksiy Pecherov from Ukraine. The most important acquisition was the hiring of Tom Thibodeau as one of head coach Eddie Jordan’s defensive ace and Randy Ayers as his No. 2 guy. Thibodeau is coming from the Rockets, primarily to help Washington solve its porous defensive problems. Randy Ayers is coming from Orlando, a previous head coach at a big-time college (Ohio State) and a pro squad (Philly) in his own right. More than anything, Washington needed a coach dedicated to defense and a respected, top assistant to help Eddie regulate a team that often seemed to be policing itself. (You get the feeling that during these past few seasons, Washington would have just come off a 125-110 loss and the next day at practice, Eddie would look around and be like, “Well, maybe if we work on the weave for another hour, we might be able to score that extra 16 were missing last night.”) Now they have that.

So now, with great coaching additions and smart off-season acquisitions, it’s basically up to Gil, Holy Caron and Antawn Jamison to get this team over the hump – specifically Gil. He’s stated that he views Jamison and Antonio Daniels as the team leaders, simply because they’re the oldest players on the squad. That type of deference is cool, I guess, especially since Jamison and Daniels are respectable vets. But much of Washington’s minor ills can be cured if Gil takes a more active role in leading the squad. They often appear to be a haphazard squad, because Gil’s play can get very haphazard and erratic. They often appear to operate with hubris and a low-level of accountability because their best and most dynamic player operates that way. Aside from him being the team’s star, he’s the point guard! That means he’s responsible for running a smooth, well directed offense AND acting as the first point of pressure and disruption on the defensive end. Sometimes – maybe even often – he doesn’t fulfill those roles exceptionally well.

I believe you can really count on Caron to be a rock and you can count on Jamison to be a leader and crafty vet. Those two dudes are consistent. You can count on Gil to be dynamic and exciting and periodically brilliant, but Washington needs to able to count on Gil to be a rock. If Gil adds consistency to his play-making, decision-making and defensive commitment, then that could spell extra trouble for the East.