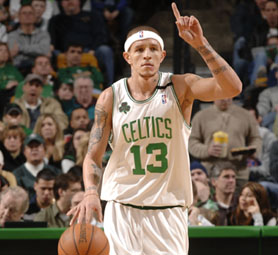 After an abysmal 23-59 record in 2005-2006 the New York Knick’s were slowly but surely starting to turn their ship around. Isiah Thomas’s cast of characters are a far cry from Patrick, Mason, and Oak, but teams were no longer penciling an automatic W next to the Knick’s game. Eddy Curry was finally becoming E-City, David Lee had built on a solid rookie campaign and become a melanin deficient cross between Dennis Rodman and Charles Barkley, and Renaldo Balkman – when he saw time – proved he could actually play a little bit. Stephon Marbury wasn’t quite “StarBury” but he had been regaining his confidence and was leading this suddenly youth driven upstart back towards a playoff birth.
Factor in Dwyane Wade’s suddenly bum shoulder and the Knick’s faithful had to be feeling good about their chances of returning to the post season via the eighth seed in the east. Isn’t it just like a guy from Seattle to rain on a parade? Queue Tuesday afternoons practice and it’s suddenly announced that Jamal Crawford has a stress fracture in his right ankle, requiring surgery, and effectively ending his season. What in the world! J-Gunner – An affectionate nickname given to Jamal due to his often questionable shot selection – seemed disappointed with the prospect of having to shut it down and should be dropped in all leagues.

If you’re looking to replace Crawford’s production in your fantasy lineup your best bet is that headband pumping hoop star Quentin Richardson who will be starting at the two slot. Unless your league is slow to the draw with the waiver wire chances are good Richardson is no longer an option. If Q is adiosed, Jared Jeffries deserves consideration and should have an increase in value as he tries to earn some of that off season dollar dollar as the starting small forward spot. Jeffries has never been much of a fantasy monster, and is more of a glue guy but his increased role may pay dividends and he can play a plethora of positions.

I can’t recommend Nate Robinson because he really doesn’t do anything but score the ball. Even though his natural position is point guard he records about as many assists per game as you or I would if we suited up for New York and his field goal percentage is atrocious. But even with all that said keep an eye on Nate to what plays out. Also, the artist formerly known as Stevie Franchise has been spotted putting up solid lines over the weekend. Reports said he was done for the year due to knee tendonitis and headed for a buyout but with Crawford on the shelf Steve will have value if his knee holds up. If being the operative word.

Wally’s World is a struggling utopia in Beantown with Szczerbiak and the Celtic’s shutting it down for the season due to an ankle surgery. Wally’s absence will open the door for more minutes for Delonte West, the former St. Joseph’s lefty, who should be owned in all leagues. Gerald Green, who is already seeing more tick due to Tony Allen’s injury, is another option to consider even though he doesn’t do much more other then score the ball. If your desperate for backcourt help and West is taken you should consider Rajon Rondo. Although he splits time with West, Rondo is a great source of steals and boards from the guard slot and his playing time only stands to improve as the Celtic’s move deeper and deeper in the Durant/Oden race.

Note to Nate McMillan: Jamaal Magloire is bunz and LaMarcus Aldridge is that dude. Your team isn’t making any sort of run this year and you might as well let the rookie live a little now that Joel Przybilla (knee) is done for the season. Besides when was the last time Jamaal put up 30 points, 6 rebounds, and 2 blocks as Aldridge did on Thursday? Say no more.

It appears Coach McMillan got our memo and will be starting young LaMarcus the rest of the way. Aldridge has been productive when he received minutes this season and his tendency to comit mo’fouls is the only thing keeping him from commanding an immediate pickup. Still, he is an intriguing option from here on out and if you don’t grab him, somebody else will.

Grant Hill leaves Orlando to see ankle specialist has a haunting familiarity to a lot of fantasy owners. Stop me if you’ve heard this one before. It’s déjà vu all over again down in Florida only this time the Magic are claiming it isn’t a serious injury and more of a precautionary measure. Regardless, keep an eye on the situation and snatch Trevor Ariza at the first sign of Hill missing extended games.

While we’re on the subject of ankles. There were reports on Friday that Ray Allen, a surprise scratch from Thursday night’s matchup against the Clippers, is contemplating season ending ankle surgery. The only thing left to debate is the timing of the surgery, and with the Sonics not making much of a playoff push out west perhaps shutting it down is the best scenario for all parties involved, fantasy owners excluded. I think Allen will try to play through the injury but if the pain persists don’t be surprised to see him shut it down. And while nothing is official yet, if you own Jesus Shuttlesworth, I recommend you unload him as soon as possible. Is that ethical? Of course not, but you have the knowledge, so do your thing. Allen has been a monster as of late and his value is very high right now.

After spending almost all of last season on the shelf, Emeka Okafor, had been a rock this season. While I am going to spare you all from a corny cliché about a rock crumbling, you know where I’m going with this. What initially appeared to be a minor calf injury now has Coach Bernie Bickerstaff suggesting Okafor will miss the rest of the Bobcat’s six game road trip. Although he initially flew with the team into Portland earlier this week he returned to Charlotte for additionally testing which is never a good sign but surgery will not be required and I expect Okafor back in a week or so. If Charlotte falls completely out of the playoff picture in the East it’s conceivable he could stay on the shelf a bit longer then absolutely necessary. I wish these NBA trainers had fantasy owners in mind when making injury recommendations. Yea, I realize my wish is futile but big Okafor holds my team down in a couple of leagues and I need him healthy. Primo Brezec and Ryan Hollins, stand up.

It’s been a tough year for Lamar Odom on and off the court and with the news he has a torn labrum in his shoulder, things just got worse. Odom is likely done for the year which is terrible news for the Lakers and Odom owners who have already endured one injury this season. When healthy we all know what Odom is capable of and as far as versatile forwards go I think he can bang with anyone. In his absence take a look at Mo Evans and Luke Walton and get ready for some big numbers from Kobe Bryant.

If Richard Jefferson is available in your league stop reading this column and pick him up. RJ is close to returning to the court and might be catching transition dunks as soon as this weekend. Much like Kenyon Martin I feel like RJ is the product of the system he plays in (Jason Kidd) but none of that matters in fantasy basketball so if you still can, snatch him up.

It seems a lot of people are dropping off the Steve Blake bandwagon and he has been inconsistent so I can’t blame you. The bottom line is Blake is going to see a lot of tick at the one, especially with JR Smith out, but if you have other options you shouldn’t worry about going in another direction. Other guys who may be available and are worth considering are Cuttino Mobley, Matt Carroll and Mr. 50, Deshaun Stevenson. If Bostjan Nachbar is on your team and you can move him, do it. Richard Jefferson is going to tank his fantasy value upon his return. Also, Yao Ming is back for the Rockets. Obviously that’s great news for the Rockets and Yao owners but if you are still holding onto Dikembe Mutombo, it may be time to cut your ties and hit the wire.

Sheesh it seems like this is more of an injury report then a fantasy column but this season has really been shaped by the IL. If your team hasn’t been affected at some point this season, play lotto, enough said. I’ve been involved in this fantasy thing for a while now and I can’t recall anything like this. If the glass is half empty all the injuries destroy star power and dwindle the level of play. If the glass is half full the injuries allow less heralded players to get some shine and make owners really dig deep on the waiver wire. I guess whatever view you choose to take really depends on just how bad you got hit with injuries this season. That’s the column for this week, make sure you check your leagues trade deadline so you know how to position yourself for the playoffs. If you have a question go ahead and post it in the comments section and I will get right at you. Week 18 is a rap, here comes week 19. Spring is on its way and it’s almost playoff time. Let’s get it!