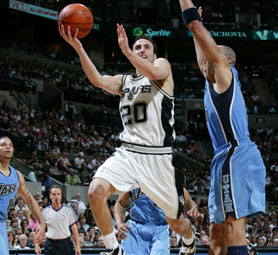 Much has transpired since my review of the infamous Amare/Boris-less Game 5 in Phoenix last week. At this point, the Suns have blown into the league’s rear-view mirror as Game 1 of the Western Conference Finals has started and finished without the fun-n-gun of the Pacific Division Champions. I have thoughts, ramblings, incoherent babblings, and predictions on not only what has transpired but what is to be of the Western Conference representative in this year’s Finals. While I have been riding with the Suns since the season’s genesis, I am definitely not surprised that the Spurs took the best of seven series.

Game 6 was back in San Antonio and the home team was a huge favorite even with the return of the Suns’ scorn studs. The Spurs were able to follow a blueprint similar to those of games prior by “wading” through the first half, and making a move during the third quarter to take a lead they would never relinquish. I guess to say that they waded through the first half is a bit of an understatement, as the big three of Tony Parker, Tim Duncan, and Manu Ginobili combined for 49 first-half points. It was the latter of the triumphant trio, however, who went off in the second half, scoring 20 to finish a masterfully played game with 33 points, 11 rebounds, and 6 assists. To his credit, Parker paced the Spurs’ first-half, as the perimeter jumper was falling, which of course, renders his defenders useless. Regardless of the defender (Raja, Nashty, Blur) Parker’s ability to hit the jump-shot opened the lane for his kniving drives which often ended in And-1 finishes.

On the Suns’ behalf, Steven Nash and Amare Stoudemire showed up, but few others did. STAT’s behemoth 38 points was “undershadowed” by the continued mediocre play of Leandro Barbosa, not to mention the disappointing play of Shawn Marion.

The Spurs’ locked things down on the defensive end during the game’s third quarter, as they quickly stretched a miniscule two-point half-time lead to 14 by the period’s end. In addition to the Big Three’s continued strong play, the Spurs got a few big shots in the quarter’s final minutes when Bruce Bowen and Jacque Vaughn combined for nine straight.

1.) The suspensions to Stoudemire and Boris Diaw were unfortunate, for sure. The timing of the suspensions was what hindered (or tainted, whichever you prefer) the series the most. A 2-2 series heading into Game 5 back in Phoenix? If STAT and Boris stay on the bench, I would almost surely be penning a Game 7 review right about now. The rule must be changed in the off-season, as far worse infractions have transpired this postseason without reprise.

2.) The Suns are close, very close. I feel that Head Coach Mike D’Antoni fell too much in love with the bigger line-up in an attempt to measure up with San Antonio’s tall front line. The one game in which they were “forced” to go small (the aforementioned Game 5) Marion’s return to the 4-spot enabled him the space and room he had grown accustomed to through out the year.

3.) The seeding issue has finally worn on me. As someone who loves the NCAA-tourney format, I always liked that the NBA (unlike the rest of the pro leagues) did not re-seed after each round. I have flipped. Many of my issues are presented below in the form of Utah Jazz-doubt.

ONTO THE CONFERENCE FINALS!

Despite being the kings of my home Northwest Division, the Jazz don’t present a challenge to the Spurs in my opinion. The predictable result of Game 1 aside, the Spurs are a challenge higher than any peak in the Sawatch Range for Jerry Sloan’s young bunch. I have admitted to being a fan of this year’s rhythmic incarnation in SLC (tough being a lifetime hater of all thing Jazz) but match-up wise it is a disaster. Point guard Deron Williams won’t be able to check Tony Parker and will have to establish himself from the perimeter before he can pick the Popp-lock defense. Tim Duncan will be more than able to do damage from all-points on the court, even on the continually impressive Carlos Boozer. The Spurs, on the other hand, should be able to keep the Juneau-native from doing his thing from the high to the low post.

Do you see where this is going?

I like the Spurs in a huge way. Almost like the Suns v. Lakers, I can’t see the underdogs getting more than one game in the series. Throw in the fact that the Jazz are an extremely average to below average road team, and the smart money has to be with the Spurs. Think five games, max.

I will also take a brief moment to look back on yesterday’s Game 1, as it will surely give us some insight as to what will go down over the next two weeks.

The Spurs bucked their earlier tradition of making a move during the third quarter, by moving things up 12 minutes. The second quarter was a perfectly played mix of defense and offense as the Big 3 were actually aided by that normally gaping hole next to Timmy. Fabricio Oberto and Cisco Elson each hit multiple buckets during the quarter second half as the Spurs flirted with a 20-point halftime lead. Despite the nice second half put forth by the visitors from Utah, the Spurs were more than comfortable to cruise to a 1-0 advantage in the best-of-seven series.

1.) Deron Williams played a beautiful game yesterday. Aside from his gaudy 34/7/9 line, the second-year guard proved that he might have more to say as this series progresses. His bang was sick.

2.) 20 and 12 from Carlos Boozer should have been a nice compliment to DWill’s performance, but with little help from the supporting cast, the Jazz were doomed.

3.) AK-47 regressed to again being average as his 7/5/2 night was actually void of a single steal OR a blocked shot. We all learned in that Houston series how important the Russian’s defense is to Jazz’s success.

Regardless of how things are doled out over at the SLAMDome, rest assured that I will be knee-deep in the Western Conference Finals. Game 2 is back in San Antonio tomorrow night!