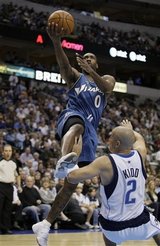 All told, there weren’t too many surprises last night: The Lakers beat their next-door neighbors with relative ease, Shaq and the LeBronnaires struggled to find their groove against Boston’s cagey vets, and Houston was awful as expected.

In Washington, though, the story was slightly different. Gilbert Arenas loudly announced his return from the proverbial dead. Agent Zero reminded Wizards fans why they had fallen in love with him in the first place — and it had nothing to do with offcourt high-jinks.

Leading his team to an opening night victory over Dallas, Arenas’s dazzling performance (29 points, 9 assists) left everyone in DC with a renewed sense of hope and confidence.

Arenas eased his way through the preseason, alternating between playing passive setup man and aggressive scorer. But on Tuesday, the three-time all-star confidently played both roles with resounding results, proving to anyone who wondered, that he is, indeed, back. “I think that anyone that had any questions about where he’s at,” Saunders said, pausing. “He’s just going to continue to get better and better.”

“I did fine,” Arenas said. “Coach told me to be myself. Don’t let the outside world dictate how I play. So, I did me.”

Of course, it’s way too early in the season to get too excited about any of this — there’s plenty of time left for things to potentially go wrong — but as someone told me on Twitter last night, 19-win seasons are unspeakably frustrating to endure. You take the positive wherever you can get it.

Bask in the glory for now, Wiz fans. You’ve certainly earned it.