Welcome to the VC Experience, SVG 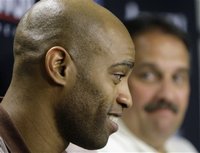 As we’re all too aware of by now, Vince Carter can’t be bothered with the little things on the basketball court sometimes. You know, minor details such as attacking the cup on a consistent basis, paying attention on defense for long stretches of the game.

Unfortunately, I’m not sure his new coach got the memo before VC landed back in Florida. We’re only a couple of days into training camp, and Stan Van Gundy is already throwing his new star under the bus about playing poor defense (during practice). Oh boy.

“He (Carter) did not play well defensively today. He didn’t do a good job out there. He’s capable of doing a lot better, and that’s what I want to see,” Van Gundy said. “As a matter of fact, we’ll talk to him about that and show him some (film) clips tomorrow.”

Van Gundy was particularly upset when Carter fell asleep on one defensive possession, allowing J.J. Redick to catch and score on a back-door play.

The good thing for Stan and the organization, is that Vince took the criticism in stride (publicly, anyway), and promises to not let his misdeed happen again.

I’m not a betting man, but I’d put just about anything on the line that this will not be the last time Stan goes to the media to complain about Half-Man’s on-court intensity.

It’s going to be a long year, SVG. Might want to think about picking your spots judiciously.