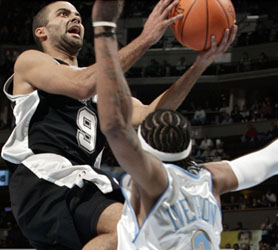 The playoffs finally get started this weekend, so today I will take a fine-toothed comb to the four series in the Wild, Wild, West. I’ll be covering the San Antonio v. Denver series closely for the site, so check back in a few for my game-to-game takes on this potentially tight clash complete with a game report or two live from the Pepsi Center.

Thoughts: Historically, this match-up is a complete s–t sandwich for the Nuggets. I’ll save you the “The Spurs own the Nuggets speech,” and look exclusively at what we have in front of us right now. The first two games between the former ABA franchises were played during that tumultuous period of the Nuggets’ suspensions/trades/injuries and therefore do not accurately reflect the current match-up. The aforementioned results, though, do mirror to the exact type of game that the Spurs want to play; their blueprint for success over the past decade.

For the first time in the George Karl regime, these Nuggets can get down and dirty and win games not played over the century mark. Sure, for most of the season the Nuggets were basically 0 for everything when they didn’t score 100, but that trend has recently changed. Look at their past month of play, and you’ll see low-scoring wins over teams that could be classified as the anti-Suns (ie Dallas and Utah.) With the inside emergence of Nene, not to mention the super-sub qualities of Linas Kleiza, the Nuggets are slowly becoming a diversified team. They can run up the score (AI/Melo isn’t working, eh?) they can defend (at least inside with Camby) and now they can score from the perimeter with Kleiza and JR Smith, not to mention Melo’s new found confidence from long range.
The Spurs, on the other hand, have done nothing to deviate from Pop’s scheme. Tony Parker is one of the top point guards in the league, period. Flopping aside, Manu Ginobili is still a great playoff/clutch performer, and the recently “gangsta’d” T-Robot will give Nene and Eduardo Najera fits on the defensive end all series long. With subs like Mike Finley, Manu’s countryman Oberto, and Brent Barry, the Spurs also are deep. Due to their style of play, the Spurs’ stars rarely require extended rest, but with a long playoff run ahead, the depth is a necessary luxury.

Prognosis: Y’all know I want to give my local side the nod on this one, but for some reason I can’t ignore the history. Despite what I just wrote in the above paragraphs, the Spurs do indeed “own” the Nuggets. While I give these Nuggets a better chance to advance –even more than the team from two years ago that ended the season 32-8—, I still think the entire series set-up favors the Spurs. I was at the ‘05 Finals in San Antonio, I know…. LET’S GO SPURS!… LET’S GO SPURS! That cheer drives me crazy. Although the Nuggets had their best road record in team history (22-19), I just see the Spurs as the team in this spot.
Make mine the Spurs in 6. I hope I am wrong.

Thoughts: Houston and Utah are not two of my favorite teams. My feelings for Utah go back to the Stockton & Malone days. Not just for their years of annoying success, but also for that Western Conference Semifinal series in ’94 which caused me to fail two of my spring finals in anticipation of rushing back to Denver for a perch high among the nosebleeders at Big Mac for Game 6. To be honest, I do like this current incarnation of the Jazz, mainly due to my respect for Deron Williams, but I also feel a bit cheated as AK-47 has had an extremely average year. Memo Okur is one of the top scoring big men in the West and with role players like the thrice-over bejeweled Derek Fisher, the Jazz have a nice make-up for postseason success. I have an issue, however, with a team that is run by a second-year player. Despite my man-crush on Williams (Bonsu put together a great piece on the Texas native in iss #107.) I worry about the assertiveness of his frontcourt, especially against a tandem the likes of Yao and Dikembe. Boozer is dope, no doubt, but he produced five points below his average in games this year against that titanic wall of defense, and Memo is a bonafide “milk-drinker.” I was always called one in college by one of my assistants, so I’ll assume it means a really tall guy who would rather chuck from the cheap seats than swap sweat in the paint. (Side note- of all the top 6 seeds, only the Jazz played their starters in last night’s meaningless contests…. They only played about 20 minutes a piece, but still curious.)

I have long been a staunch non-supporter of Tracy McGrady, but I do feel that he has had an extremely mature season, stabilizing the Rockets when Yao was down, dominating when needed, distributing when called for, and leading his squad to a surprisingly successful season in the wickedly competitive Southwest Division. While not a huge fan of Skip within a Jeff Van Gundy-coached team, I do like the remainder of JVG’s supporting cast of Luther Head, Shane Battier, Deke, and Juwan Howard.

Prognosis: Home court advantage is going to be an integral part of this series, as Houston has proved to be a far more superior road team than the Jazz. With Houston’s win over Phoenix on Monday night, the Rockets ensured that the majority of the games would be played at the Toyota Center as opposed to the Salt Palace, or whatever they call the Delta Center these days. Based on this fact, the Rockets must get the nod over the Jazz. I think I’ll play it safe and say the Rockets in 7. Oh yeah, and the Rockets will win it for Bonzi.

Thoughts: Despite the thrilling 7-game series from a year ago, this match-up does not appear set to wow the fans of the L again this spring. In the last month and a half, the Suns and Lakers played each other three times with Phoenix winning relatively close games in each. Over the past month, the Lakers played as if they were trying to give their fans the impression they were tanking in hopes of more ping-pong balls in the draft-lottery hopper. The Lake Show was a combined 8-15 over the final month and a half of the season, with much of the blame being shouldered by Kobe and his struggles to figure out the best way he can be of service to his team. Does he score and just try and carry the team? Does he play the role of point-scorer and try to get everyone involved while still getting his 25? The scrutiny at times has been unfortunate for #24, as he has been Ruthian in his overall play this year, but bottom -line, his team is just not that good.

Do a talent search of teams in the Western Conference. Run down the rosters. The Lakers should really not even be a playoff team. The skill sets of the Zen Master’s team are far inferior to that of even their Staples Center brethren. Other than at 2-guard, the Lakers are shaky at best at EVERY other position. They’re not that deep, either.

Now on the other hand……Amare, Steve Nash, Raja Bell, Shawn Marion, Barbosa, Boris Diaw, etc….. You’ve seen the recent cover. Based on these personnel discrepancies alone, the smart money has to be on the Suns, in a minimal number of games. This year’s Suns have begun to deviate from their past of gun-n-gun exclusivity. In two of the games against these very same Lakers, the Suns were able to capture the win without breaking the 100-point mark. Other than our cover love, the Suns have to be the most slept-on 60-win team in league history. Everyone is giving the Mavericks and the Spurs (historical benefit of doubt) the top two “unofficial” seeds in this postseason. In my estimation, this Suns’ TEAM is truly set to make a long push into the postseason.

Prognosis: I think I may have already tipped my hat, with an obviously strong lean towards the Suns in this match-up. (cue the “Cub, you’re just a Laker and Kobe hater” comments.) I hope that the Lakers can prove me wrong, as I would love to see them try to duplicate what they put forth last year. Again, though, I just don’t think the Lakers are ready to compete for any kind of championship, let alone when they are forced to face a 60-win high-flying scoring machine in the first round. Until Bynum develops further, Kupchak and Co. bolsters the backcourt (ie someone other than Smush,) and Lamar Odom “finds” himself, the Lakers are doomed to annual early-May tee-tee times at Riviera. I can’t see the Lakers winning more than maybe one, so it must be the Suns in 5.

Thoughts: While the Warriors were able to take all three games from the Mavericks during the season, let’s look at the games more closely. The first game was during the season’s first week when the Mavericks had their well-publicized 0-4 start, and the last one was against a stripped-down Mavericks roster just this past Tuesday evening. The Warriors do deserve major credit for their other win, which snapped the Mavericks’ 17-game winning streak in mid-March. They frustrated the Mavs defensively and offensively from the tip in that game forcing the Mavs onto their heels; never to recover. The Warriors even took two of three from Dallas last year, but to study just those numbers alone would be foolish. The Warriors have obviously improved with their midseason additions from Indy. The infusion of energy, talent, and attitude has given Don Nelson’s team the needed kick they never truly got from DunMurphy. BDiddy and JRich are finally healthy and both are looking strong. Biedrins is my closet sleeper for the title of “the next big thing,” and Monta Ellis and Matt Barnes give support and points, in bunches.

Unfortunately for Warriors’ fans, this Dallas team is no less a juggernaut at this point. Their season long record of 66-15 is amazing especially considering the throwaway games. Dirk is on top of his game right now. He can score from anywhere on the court on anyone he wants. For a 7-footer to be able to can 18-foot fadeways, deep 3-balls, all while sticking the midrange jumper, it is truly special. Josh Howard is somewhat gimpy, but the recent rest will surely help re-energize his kinetic play. Big efforts from the Mavericks diminutive duo of Devin Harris and Jason Terry will also help keep the Warriors guards active on both ends of the court.

Prognosis: In this match-up, I see the backcourt of the Warriors physically able to dominate the Mavericks’ guards. With Harris on Davis and Terry on Richardson, the size and strength factor swings strongly in THE CITY’s favor. However, this is not the NCAA Tournament where guard play is all-important. I think the Mavs will buck the trends and take this series with relative ease. The Lil’ General will not let his team “overlook” the first round, keeping them myopic on the task at hand. Dirk will be too much for the Warriors frontcourt to deal with. Yes, Harrington can physically work Dirk around, but again, Dirk can score from anywhere, over anyone. He’d go right by Biedrins, if Nellie went that way, too. I’ll take the Mavericks in 5.

The Wrap will return in a couple of weeks with a preview of the Western Conference Semifinals. Enjoy the games!