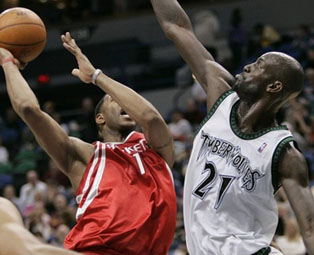 Happy day to all of you craving the inside scoop on the Western Conference! Things are continuing to heat up across the conference with streaks seemingly growing like wildflowers. I have added some new segments to this, the third installment of the Wrap that I hope you enjoy. I am still interested in what it will take to get the Washington Wizards a charter membership into the West. Despite their geographical positioning, nothing about that team reflects the nature or style of the league’s other conference. We’ll start with the standings after last night’s contests.

Winners of 6 of their last 8, the Timberwolves have started the New Year in grand fashion, as Kevin Garnett is beasting up his numbers despite the trade rumors that have been swirling around his cleanly-shaven dome piece. Newly added, Mike James is finally starting to gel with KG, Mark Blount, and Tricky Ricky, and the Wolves continue to get contributions from their rookies, Randy Foye and Craig Smith. Now locked with the depleted Nuggets for the second spot in the Northwest Division.

Having two 12-game winning streaks in a season is just ridiculous. The fact that Dallas has been able to squeeze two out before the season’s midpoint is astonishing! Their recent loss to the Lakers, aside, the Mavs are doing it again, with a combination of solid guard play and this guy named Dirk. The one difference between this team though, and those of the past must be attributed to the defensive tenacity that was infused with the signing of the Lil’ General as coach.

Phoenix continues to gather W’s at a breakneck speed. Like Dallas, the Suns are on another streak, as their win last night over Seattle puts their most recent run at 7 straight. From Stoudamire to Marion to Nash to Diaw to Barbosa, this squad just might finally be able to rep the West in the race for the Larry O’Brien.

The Lakers continue to amaze. Last night’s defensive disaster aside (i.e. giving up almost 50 in one quarter to the conference’s worst team) the Lake Show has been able to win with a team-oriented type of approach. Kobe is no longer jacking up 40 shots a night, instead opting to involve his teammates and keep his gun holstered for the most part. The amazing thing to me is that once Lamar Odom went down, it seemed likely that the team would NEED Kobe to score in large amounts. This has not been the case.

When your starting lineups regularly include the likes of Linas Kleiza, Yakuba Diawara, or Julius Hodge you can’t expect to have a strong stretch of games. Denver has limped to a 4-6 record since the Garden suspensions were handed down, but the silver lining is finally in view for Nuggets’ fans. Guard JR Smith returns to the lineup tonight as the also-struggling Spurs visit the Mile High City. His ability to mesh with Allen Iverson will be crucial, as they sit just five games away from welcoming back Carmelo Anthony.

Despite being winners of their last two, I had to name the Silver and Black for the past two weeks of play. Manu does appear ready to finally start supporting Tony Parker and Tim Duncan, but his inconsistencies have recently hindered the team’s success. Yes, they are still 16 games over the .500 mark, but this year’s team needs to get things figured out if they want to make another run for the ‘chip. For a team that has historically dominated at home, 6 losses this early in the season is WAY too many.

The Hornets must make this list, but they have a MASH unit to blame, as half of their team seems to be missing on a nightly basis. No Peja and no Chris Paul make it tough for this team to compete in the West.

The league has released two updated numbers on the fan voting for this February’s All Star Game in Las Vegas and the most recent one has shown no significant changes besides the addition of Allen Iverson to the mix. Possibly the most intriguing aspect of this game—besides the hoards of debauchery which is sure to ensue in LV—will be the ex- or in-clusion of Carmelo Anthony. Before his momentary lapse of judgment last month at the Garden, Melo was a lock as he raced to top of the league’s scoring table, but now a month away from action may make it easier to justify another Melo-less contest.

GUARD: -Kobe leads followed closely by Houston’s Tracy MacGrady and the newly added AI. If TMAC is voted in (thank you Yao-crazed Rocket fans,) then the remainder of the roster spots have to be split between Nash, Iverson, Chris Paul, and the extremely deserved Tony Parker.

FORWARD: The most stacked group in the league has KG and Timmy strongly entrenched as the starters. Dirk and Melo come in at third and fourth, respectively, and again it will be interesting if Melo can do enough when he returns on the 22nd to earn the coveted spot. To say that Carlos Boozer, Zach Randolph, Josh Howard, and The Matrix aren’t all-stars is a reach and a decision that I do not envy.

CENTER: For the next decade, the starting western conference center will be Yao. Yes, he has finally earned the mention, with STAT as his only contemporary at this point. Both will be in Vegas for sure.

With each year brings familiar ballers in new locales. Today, we will look at those who are making a big difference and contributions to their new squads.

Point: This is one is a two-man race between former Lakers, Derek Fisher and Jannero Pargo. I am going
to go with Pargo on this one, as the fifth-year guard has basically doubled his career averages in his first season with the Hornets.
NOD: Fisher has been a great backup to Daron Williams in Utah. DFish is dropping his normal 10p/3a to compliment his leadership and big-game toughness.
Shooting guard: Although he has not tracked up an NBA court in almost a month, I am still going to go with Denver’s JR Smith. Smith has increased his scoring load by 7 per game over his two years with the Hornets, and has helped the perimeter-shooting-starved Nuggets with his 40% clip from beyond the arc.
NOD: To the Lakers, Maurice Evans. Although, Evans has not made huge strides with his averages, the former Piston has given Phil Jackson a needed lift off the bench. Evans has also played key minutes down the stretch of games.
Small Forward: This is the easiest of the group. Golden State’s Matt Barnes has done the double as well, dropping almost 12 a night to along with 4.5 boards and a couple assists. After playing with 5 teams in 3 years, leave it to Nellie to find someway to get the UCLA-product involved.
NOD: Not sure if there is one with the injuries to Peja and the substandard play of VladRad in LA.
Power Forward: Two teams swapped players this off-season involving players who had given their teams similar production. Stromile Swift and Shane Battier-both basically 10 and 5 guys—are each averaging about 10 and 5 for their new team. Maybe Houston and Memphis didn’t need to make that trade.
NOD: See above.
Center: The Hornets again factor in on this one, as Tyson Chandler has given his new team a lift after 5 years in Chicago—Five years, already? Although, the spindly seven-footer has not blown up in the offensive department, he is currently ranked in the league’s top ten in rebounding with 11.5 a night.
NOD: To ex-Nugget Francisco Elson, who has fit in quite well into the “Rasho/Nazr Role” with the Spurs. The Dutch national has bumped his averages up about a point and a rebound each night, showing consistency he couldn’t while in Colorado. Elson has been forced to miss the last couple of weeks and probably one more with a slightly torn rotator cuff. Coach Pop probably just needs to cut back on his innings.

There you have it! See you in two weeks!