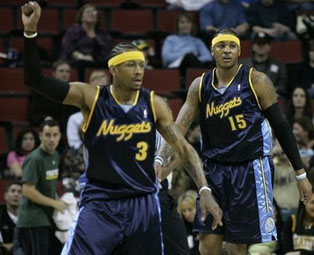 Just days removed from Sam’s timely piece on distinguishing the cream of the basketball crop, I return with more thoughts and ideas on not only the two titans in Dallas and Phoenix, but also on those teams that might be able to challenge either for conference supremacy. As usual, we will look down the standings for each division; analyze a few East-West trades made in recent weeks, and look at my all-international lineup.

Dallas and Phoenix have lost a combined 8 games in the past 75 calendar days. That’s 75 total games played between the two of them (since their respective poor starts) and only 8 losses! The Suns are in the midst of a 14-game win streak and the Mavs are knee deep in another one, as well, this time it’s at 8 games. Neither team has endured any significant injuries and/or suspensions, which makes the head coach’s job much easier. No worries about the lineup and therefore the impending match-ups and styles of play they would need to alter. Think George Karl would have enjoyed that luxury to this point?

Speaking of Denver, the Nuggets are currently on their longest streak of the year, as last night’s win in Seattle stretched things to five. With Melo’s return Monday night, not to mention the improving health of Marcus Camby and Nene, the Nuggets immediately become the scariest team in the conference. Gone are the days of Yakhouba Diawara and Linas Kleiza in the starting lineup. Gone are the silly suspensions to Anthony and JR Smith. Also gone, is Earl Boykins (more on that later). A pretty easy schedule over the next two weeks should afford the Nuggets the ability to make a move on Utah’s 4.5-game lead in the Northwest, and the opportunity to avoid Phoenix or Dallas, at least for one round.

Like the sun setting in the west, the Spurs are starting to get their proverbial shit together in time for the season’s second half. Tony Parker is balling at an all-star level, Manu is finally starting to play more consistently, and reserve Brent Barry is giving the team the outside threat that Bruce Bowen has not been able to provide this year.

Two weeks removed from being on the other side of this list, the Timberwolves are again on the skids, as they have dropped their last four games. This dip in performance was the not the only reason for Head Coach Dwayne Casey’s recent firing, as Randy Wittman returned as an assistant for a specific reason (i.e. taking over the head job). For the record, I am a huge Kevin Garnett fan, but how does he receive just a one-game suspension and the participants in the Garden Party got so much more? I heard some national “experts” saying that because KG whiffed on his attempted right-cross on Antonio McDyess, he got just the one game. Shouldn’t Garnett have gotten more, because he has bad aim? I’ll buy the whole “spilling into the crowd” argument, but I can’t believe that Melo’s punch/slap was 15 times worse. Intent should be the determinate, not results.

Houston has had a tough couple of weeks, after experiencing some of their first success with one of their two stars is on the bench. With Yao out of the lineup, they will have trouble against teams with strong frontcourts and rebounders. This team cannot continue to keep things afloat in the Southwest Division. Although, I have said that very thing in this space before…

Golden State has had trouble integrating their new team members into the often-changing lineup in Oakland. Truthfully, I don’t like the Warriors’ end of the trade, but more on that below.

— The first trade we will examine flew a tad under the radar. While the Nuggets trade with Philadelphia to acquire AI made major headlines, a smaller trade was made, as well. The Denver Nuggets moved Earl Boykins and Julius Hodge to the Milwaukee Bucks for guard Steve Blake. After bringing AI’s large contract to the Mile High Region, the Nuggets were forced salary-cap wise to move some money, hence the departure of local fan-favorite, Boykins. Blake had done little in his brief time in Milwaukee and figured to follow suit upon his arrival in Denver, but this has not happened. In just 6 games, Blake is scoring about 12 points a game, has hit some big late game shots, and is providing Coach George Karl a pass-first backcourt option, who also happens to enjoy running and pushing the pace. Blake, AI, and JR Smith have looked very strong in their brief time together, and the grouping is a much more realistically successful triad than if it included Boykins, instead. Boykins gave the Nuggets a lot in his 3.5 years of service, but I always felt that if the team “really” needed him to score, they were ultimately in trouble. Boykins is again, scoring in bunches for his new team, but I won’t even classify the Bucks as a threat, especially with Mo Williams and Michael Redd spending ample time recently on the shelf.

–The AI trade aside, the largest in-season trade to date happened between Golden State and Indiana. Troy Murphy, Ike Diogu, and Mike Dunleavy now call the Hoosier State home in exchange for Stephen Jackson, Al Harrington, and Sarunas Jacekcicivucicucus. The move was an attempt on the Pacers part to expunge the last thread of locker room turmoil, while the Warriors looked to get a bit more athletic. Lil’ Dun was getting little to no run under new Warrior coach Don Nelson, while Diogu has always been better suited for the half-court slugfests of the Eastern Conference. This trade is still in its infancy, but early returns have not been solid for the Warriors.

In keeping with the tradition set in the first few installments, I have a new all-star set! The list below is my All-International team. Remember, this is not Euro-exclusive, “international” means, not from the US.

GUARD: I’m going with dueling points on this team which starts with that pesky Canadian (and reigning two-time MVP) manning the point, which is a no-brainer, and ends with France’s Tony Parker who has played brilliantly this year and gets the mention over his backcourt teammate in San Antonio.

NODS: Another Spur and a Sun are represented in this spot. Argentina’s Manu Ginobili and Brazil’s Leandro Barbosa will make up the second unit. After a shaky start, Ginobili is averaging over 20 points in his last dozen ballgames, and you all know how I feel about the Brazilian Blur.

FORWARD: Dirk is the obvious pick at the four-spot, and Peja or AK-47 would be naturals at the three, but they can’t be named to this list, what with Kirilenko’s brutally average play, not to mention Peja long stint in “league approved” bench gear. So, my small forward is another Sun, Boris Diaw. Every day I see him have success (ie every one since he landed in Phoenix) it makes me giggle with the thought of bewildered Atlanta Hawks fans.

NODS: My other forward in this group goes to Pau Gasol, who missed a large CHUNK of action early in the year, but has been more than solid in his return to the wretched Griz line-up, which may be short-lived, as his name is hot and heavy in the trade circles. I guess I’ll give Kirilenko the nod, as he is just playing below his capabilities, but he is still filling up the stat sheet, predominately on the defensive end.

CENTER: Yao. Despite missing the last month due to a fractured wheel, Yao has put up career numbers while his team has reached its best record during his time in H-Town.

NOD: To Utah’s Mehmet Okur, who should also get some nods for the ASG in Vegas next month. The Turkish national has continued his strong play of a year ago by putting up numbers of 17 and 7. Despite AK-47’s poor start to the year, Okur has paired up front with Carlos Boozer to spearhead the Jazz’s first place resurgence.

We shall return in two weeks with our next edition of the Wrap, which should include rosters for next month’s All-Star Game!