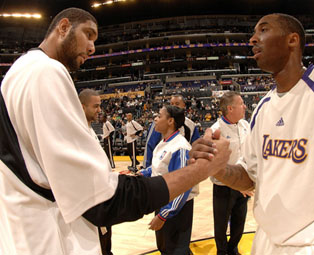 As a consistent and longtime contributor to the extreme excess which takes place within the city limits of Las Vegas, I truly felt for the SLAM crew as they attempted to balance work and pleasure this past weekend during the ASG. A 12-hour car ride is all that separates me from the wholly pleasure and pain that Vegas has to offer. I have taken way too many spur-of-the-moment jaunts, as well as many stopovers on my way to visit family and friends in the Los Angeles-area. For my east-coast brethren at SLAM, mainly Sam, I truly enjoyed reading the anticipation and the eventual debauchery that ensued this past weekend. I have been in LV at all times of the year; spent holidays at the Treasure Island (my personal fave), sweated trough the exhausting August heat, and even gave my now 10-month-old daughter her first taste this past September- we stayed off the strip and out of the casinos. Well, at least she did. My thing with the “island,” is you can actually make it from your room to the pool/buffet/tables/the outside world in less than a half and hour. Meanwhile, the “newer” strip casinos make you navigate through a labyrinth of smoke and mirrors just to go back to your room to get at that “emergency cash” you told yourself (and the wife) you wouldn’t break into until at least the last day of your stay.

Looking back, my first true experience with Vegas (by “true” I mean, my first “of age” trip) was just days after my graduation from college in the summer of ’96. The off-season AAU circuit was in full-swing, and the national high school tournament I had taken part in just four years prior was in town. College coaches were everywhere; you couldn’t help but trip over one, like me physically bumping into Hoya coach John Thompson (the elder) feverishly feeding the one-arm bandits (back when you actually put in currency and pulled the lever.) It was late/early, depending on your prospective, I was sporting full-facial hair and a mop that had earned me the “Christian Laettner” moniker in arenas around the Ivy League. I was into hour 4 at a 7-card stud table (Hold ‘Em was still stud’s bastard child back then) nursing my 10th maybe 15th longneck of the day. From across the table, I hear, “Cubby (as I am still often called by my family/close friends) is that you?” I look up from my dwindling stack of chips to see the entire Air Force Academy coaching staff that had heavily recruited me during my prep career. Looking like the farthest thing from an Academy graduate, I struck up a long conversation about what my college experience had turned into, at an extremely liberal east coast school. This all came after I rescinded my verbal commitment to the USAFA—I decided against Kuwait– and instead choose the hoops hotbed of the Ivy League-remember back then that the Academy’s program was on par with those in the Ancient Eight. Turns out that the two players I spent the majority of my time with during my series of official and unofficial visits were currently in post-graduate military training, wading in the Carolina tides for hours on end. Me? I was shaggy, unkempt, unemployed, and drunk. But at least I wasn’t wading in the Atlantic surf, eh? I have a special affinity for the Academy despite my polar opposite political stances on war and shit, but I love Vegas so much.

Again, kudos to our brave editors for wading through the mass of vulgar and hedonistic humanity to bring us the stories and tales that we all enjoyed these past few days. It made my weekend cold and fever seem much less brutal, and warmed my heart to hear their tales of debauchery. Remember this all came from a group that is predominately married, as well! Give it up to Sam, Ben-who(m) I have enjoyed Vegas with during March Madness, Lang, Khalid, and Shannon! Well done, fellas.

Oh yeah, this is supposed to be my bi-monthly examination of the Western Conference. With few “real” games played between today and my last installment, I decided to get a bit ahead of myself and examine some possible first-round playoff match-ups. With many of the divisional races almost out of reach—Utah’s 8.5 lead over Denver is currently the smallest of the three– we can step back and look to this spring’s impending postseason. The one tricky part might be the 3rd/4th seed between the Northwest leading Utah Jazz and the San Antonio Spurs. Based on track records, and that beatdown they put on the Nuggets last night, let’s give the Spurs the nod as the conference’s third seed.

Dallas (1) v. Minnesota (8). Whether the Clippers or Golden State can wrest the last spot from the Timberwolves is completely irrelevant, as the Mavericks appear primed to make another long run in the postseason. They are healthy, experienced, well-coached, and probably a bit bitter after last season’s game 6 collapse in South Beach. To their credit, the Timberwolves have shown recent flashes of the team that was just a game away from the ‘04 Finals, but with a midseason coaching move not to mention little firepower surrounding KG, they realistically stand no chance. MAVS in 5.

Phoenix (2) v. Denver (7). You all know where I call “home,” but this potential series might be a tricky one for the Suns to breeze through. Will they still may be fumbling around, losing games late one after another (remember they have blown 10 games in which they led with three minutes remaining) the Nuggets do pose a threat. Will they be a cohesive unit ready to compliment the surplus of talent that Coach George Karl has at his disposal? Due to the inconsistent lineups that Karl has had to deal with all year, anybody’s guess is as good as mine, and I consider myself a foremost authority on the Nugs and the West. I know that the Suns would probably prefer any team other than Denver, based on the unknown, but like the Mavs, the Suns are experienced and are getting healthy at the right time. They also have this guy named Steve Nash, who returned last night from the shelf. SUNS in 6.

SAN ANTONIO (3) v. LA LAKERS (6). For the record, I am not sold on this Laker team. Too many holes for me to honestly consider them a threat to a team that has won two of the last four chips. Kobe has made huge strides from even the player he was last year when he and the Lake Show had the Suns on the ropes in the first round. But, Timmy, TP, Manu, and Co. have to get the nod, as it seems like Kobe may be reverting back to “bad Kobe” and jacking up everything in sight. SPURS in 7.

UTAH (4) v. HOUSTON (5). Like Denver, I feel the Rockets are a big-time wild-card. Who(m) knows what they will constitute come playoff-time with Yao back in the fold. TMac has proved me wrong at most turns this year and if they can continue to get help from those around them (ie Battier, Juwan, Skip, Luther Head, etc.) they might be a group that could prevent the preordained Western Conference Finals match-up of Dallas and Phoenix. Utah, on the other hand, is still a team a year or two away in my opinion. I LOVE Deron Williams and their frontcourt is as versatile as you will find in the league, BUT…….They just don’t seem like a squad ready, especially with the uncertain health status of the NBA’s Beast of the Year (can we get some awards like that?) Carlos Boozer, and the horribly inconsistent play of Andrei Kirilenko. HOUSTON in 5.

Sorry for getting so far ahead of myself with today’s report, but I think this first round might be one of the most exciting in league history.

SIDE FACT OF THE WEEK: As Nuggets’ forward Carmelo Anthony continues to expand his game and produce more rebounds and assists; I was tempted to look back at his one year in the college game. Like was mentioned this past weekend in Vegas, dude is big, really big. While I am one of the few writers who can look him eye-to-eye, my scrawny 2-bills has nothing on the 4th-year star’s physical stature. WHY DOESN’T HE BOARD MORE? This question has been pondered around Denver in the past year almost more than whether Mike Shannahan should be starting Jay Cutler. Chew on this.

Melo has never had more than 3 or 4 double-doubles in any of his four years in the league. Curious…… Seeing as how he holds the NCAA-record for dub-dubs by a freshman with 22 during ‘Cuse’s title-run season of ’03! Keep hitting the boards, kid!

See you all in a couple weeks!