What LeBron James ‘Should Do’ 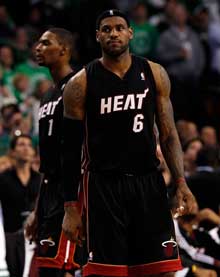 Sporting a light purple and white checkered shirt with no jewelry, he seemed bare. His appearance wasn’t the only thing bare but so was his demeanor. All emotion was wiped off the face of LeBron James. ESPN cleared all their regularly scheduled programs just to televise this conversation between him and sportscaster, Jim Gray, which was dubbed as “The Decision.”

A little over five minutes into their conversation, LeBron changed everything with one statement.

“In this fall, this is very tough, in this fall I’m going to take my talents to South Beach and join the Miami Heat.”

I thought, “How could he do this?” The great ones don’t join forces with players on their caliber. LeBron James and Dwyane Wade are both two of the top-3 players in my eyes. Michael Jordan and Magic Johnson would have never done that. “The Decision,” left a bad taste in my mouth initially. As an avid LeBron follower since his St. Vincent-St. Mary High School days, I have to admit that I wanted LeBron to stay in Cleveland and win it the hard way. This would build his own legacy as arguably one of the greatest players of all-time.

It took me a while to really sit down and accept his decision. Who am I to say what LeBron “should” have done? Who is anyone to say what LeBron “should” have done? Did anyone ever think about what was best for LeBron? No one was willing to go to Cleveland, he was tired of losing, and the best opportunity presented itself. Everyone should accept his choice to join the Miami Heat and move on. There is no reason that we

should still be talking about this four months later.

This country is based on jumping on the bandwagon. Whatever is hot is what people ride but once it’s not then we tend to throw it in the dirt (I.e. Michael Vick, Tiger Woods, and Allen Iverson). Mark my word, LeBron James will rise above this. He may never be in the same category as a Michael Jordan or a Kobe Bryant as far as the public is concerned but this will blow over.

Most of his doubters are in fact huge fans so their opinions really don’t count. The comments from both Michael Jordan and Charles Barkley were both unnecessary.

“There’s no way, with hindsight, I would’ve ever called up Larry, called up Magic and said, ‘Hey, look, let’s get together and play on one team,'” Six-Time NBA Champion, Michael Jordan said. “Things are different. I can’t say that’s a bad thing. It’s an opportunity these kids have today. In all honesty, I was trying to beat those guys.”

“I thought that his little one-hour special was a punk move. I thought them dancing around on the stage was a punk move, and I thought he should’ve stayed in Cleveland,” NBA Legend, Charles Barkley said. “Him joining Dwyane Wade’s team was very disappointing to me … That one-hour special, them jumping around on stage like punks, that wasn’t cool to me. From a basketball standpoint, I wish he had stayed in Cleveland, and if he takes that as criticism, so be it. He knows where I’ll be, I don’t run. I’m on TV every week, I’m easy to find.’”

Jordan never gives credit to anyone but himself. Barkley only seeks attention and has gone on record to say LeBron is the game’s best player.

Despite a lackluster performance in the season opener when the Miami Heat took a ‘L’ to the Boston Celtics in Beantown, 88-80, things will get better for the King. He did pour in 31 points connecting on 10 of his 21 shot attempts, which was the most by a Heat player in his debut. Honestly, I don’t believe the Heat will have another game that bad all season. What’s the probability of James and Wade both combining for 14 turnovers again? It wont happen!

For all the doubters, Nike just prepared a new commercial for LeBron James to promote his eighth signature sneaker titled “Rise.”  The theme of the ad is LeBron asking: “What should I do?” There’s a spot that sticks out to me where he is on the podium at his empty Hall-of-Fame speech and LeBron asks: “Should I really believe I ruined my legacy?”

My answer to that question is, “No, just go out and do what you have been doing.” LeBron James should just play basketball and let the rest speak for itself. I’m sure he wont let anyone down. We are still all witnesses.