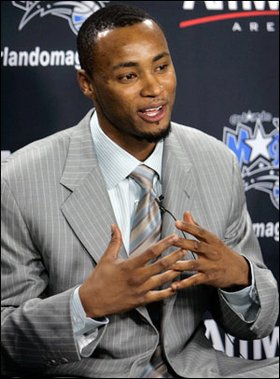 Above all else, what I took away from the surprising news yesterday is that suspicion of pro basketball players – which had been bubbling underneath the surface for some time, largely due to the embarrassing steroid scandals in baseball and football – is now at an elevated level (justified or not).

Beyond that, I’m not sure there’s much else to take away.

Before Lewis, only a handful of NBAers had been busted for performance enhancing drugs, and none were for anything one would deem overly serious. And that reportedly includes ‘Shard — so says this steroid expert the Orlando Sentinel dug up.

All of this is not to say that Lewis shouldn’t be punished; he absolutely should. Rashard broke the rules, and for that he’ll face the harsh consequences.

And it’s good for sports fans to have this conversation, as we’re afforded an opportunity to learn more about the issue of PEDs (which is obviously not going away anytime soon.)

So, what about the Orlando Magic, who will be without one of their top players to kick off the season? Vince Carter may have to carry a bigger load than he or anyone else had anticipated.