What Went Wrong With Michael Beasley? 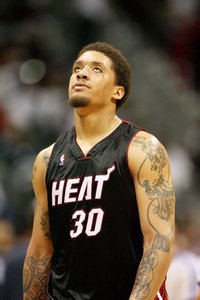 In today’s cynical age, it shouldn’t really come as a surprise to anyone that some people were quick to assume that B-Easy’s entry into a rehab facility was nothing more than a PR move by the Miami Heat following their young forward’s controversial weekend.

It’s being assumed in many circles that Beasley is actually battling depression, and he’s now in the hands and care of John Lucas. Still, the pointless race is on to figure out what went wrong, and if anything could’ve been done to prevent it. (The media, after all, loves to psychoanalyze “troubled” celebrities.)

It’s unlikely that we’ll ever know the whole truth in this situation, and that’s perfectly fine. Thought it’s obvious that Beasley has issues to work through — and will hopefully get to do that with the aid of Lucas — the problems are his, and ultimately none of our business.

The only certainty in all of this is that Michael’s trade value has taken a hit, something Pat Riley and company are surely all too aware of.

The rest of the chatter is little more than white noise.