Whatever RJ Is Smoking… 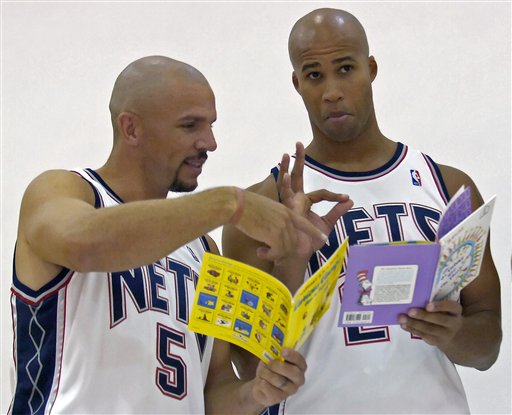 Before the Nets went out and got their asses handed to them by the Heat on Thursday night, Richard Jefferson made a curious decision: He decided to open his mouth.

“I don’t really think there’s a team in the East that’s better than us,” Jefferson said. “We’re one of the best teams. This is not like crazy talk, I just believe that when we’re healthy, we’ve proved that we can beat everybody.”

“I don’t believe there’s any team better than us,” Jefferson said. “Any time we step on the court, especially in this Eastern Conference, I believe that we can beat anybody in a seven-game series.”

Sorry, RJ. That IS crazy talk. Your team is 31-36 and in seventh place in the East. There are at least five teams (MIA, DET, WAS, CHI, CLE) in your conference that would beat you in a seven-game series. Nice try, though.

Sticking with the Eastern Conference, Pat Riley recently attempted to credit assistant coach Ron Rothstein and his work during Riley’s absence for the Heat’s resurgence:

“Ron was huge. He reminds me of that every day now,” Riley said. “That’s when this whole thing started.”

While compliments and pats on the back are great, I’m sure Rothstein would have preferred a head coaching gig for the rest of the season.

I’m a Laker fan, but another team I’m going be riding with in the playoffs is Denver. Those guys are starting to get it together, and I can’t imagine that too many people are looking forward to facing them this summer.

Say what you will about a predictable letdown after the Dallas game, but what Iverson and company did to the Suns on Saturday night was downright filthy. Sure, they wouldn’t know defense if it hit them in the mouth, but I remain very excited about this Nuggets team.