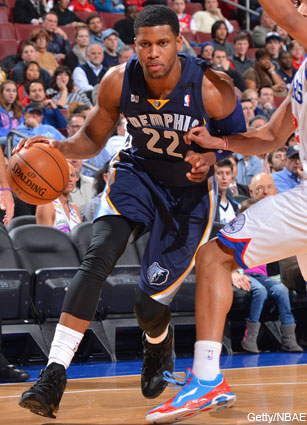 The NBA trade deadline is three weeks from tomorrow. By now each team should know if they’re going to be buyers or sellers. They now have three weeks to ready themselves for Playoff runs, cut costs, trade off-the-court distractions or blow the whole damn thing up. Good news for some lucky general managers—I did their work for them. Here are five trades I think would benefit all teams involved that should happen before the February 21 deadline.

The Financials: Gay gets paid more than the Young brothers combined, but because of CBA trade rules that I won’t embarrass myself by trying to explain, the deal works just fine.

What’s in it for Memphis:
The Short Answer: They save money without taking a big hit in on-the-court production.
The Long Answer: After trading away Marreese Speights and Wayne Ellington, the Grizz are under the luxury tax. That means they don’t have to trade away Gay, but they’re still over the salary cap and this deal saves them money.

Over the next three seasons, Gay is set to receive roughly $53.5 million (roughly $18 million annually). Over the next four seasons, Thaddeus is due just $35.2 million (roughly $9 million a year). Those numbers include this season, so some of that money has already been paid, but it’s still a big savings for Memphis—about $9 million annually, plus an extra year on the better Young’s deal.

On top of that, Thaddeus’ Player Efficiency Rating—a system created by John Hollinger, who now works in Memphis’ front office—is higher than Gay’s this year. He’s shooting around 52 percent from the floor on his way to 15 points with 7.2 boards. He steals and blocks, and seems like a perfect fit on the Grizzlies to me.

His downside is his propensity to post 11-point, 6-rebound games, but the Grizzlies are good enough to pick up his slack on those nights.

Meanwhile, Nick Young would replace the punch off the bench they lost in the trade with Cleveland, and expires after this season if Memphis feels like further cutting costs. Can he shoot you out of a game? Yes. But Memphis has the depth to keep him on the bench, or, at least, not pass to him, during one of his brutal games, but reap the rewards when he gets hot.

What’s in it for Philadelphia:
The Short Answer: They create their own Big Three.
The Long Answer: T-Young’s numbers look great overall, but his individual games aren’t as sweet. The Sixers need a more reliable scorer, since Evan Turner is a top candidate for LCPY (Least Consistent Player of the Year). Gay is a little trigger-happy and doesn’t get great bang for his buck considering how many shots he takes, but there’s no doubting his reliability as a mid-range scorer and clutch guy late.

If Andrew Bynum (by the way, how many times as “if” come before “Andrew Bynum” over the last bunch of years) re-ups with Philly (why wouldn’t he after the season he’s had), they’d have a very serious team next season. I would imagine most Sixers fans would sign on board for a lineup featuring All-Star Jrue Holiday, Evan Turner, Gay, Spencer Hawes and Bynum. They’d still have Jason Richardson and Lavoy Allen (and maybe Dorell Wright if they re-sign him) coming off the bench, as well as rookie Arnett Moultrie and whoever they take with what will likely be a mid-teens pick in the upcoming Draft (unless they make the Playoffs and Miami gets their pick).

Speaking of Philly making the Playoffs, they’re the big beneficiary of Rajon Rondo’s terrible injury. The Sixers sit just three games behind the Big Two in Boston for the eighth spot in the East right now. I know I’d bet on a team featuring Holiday, Gay and maybe Bynum to knock the Cs out of the Playoffs. In the long-term, the deal forms a team that can contend for first-round home-court advantage in a shallow Eastern Conference in future seasons.

What’s in it for Oklahoma City:
The Short Answer: They get a lot better in the short-term.
The Long Answer: The Thunder are an awesome team—probably the best in the West. But that’s not to say they don’t have a few holes. Mainly, Perkins is one of the least efficient guys in the NBA. He plays decent defense, but his offense is brutal. His 46 percent mark from the field doesn’t do his offensive ineptitude justice.

Enter Gortat, a career 55 percent shooter from the floor. He has a knack for getting open down low and is a quality finisher under the basket. Serge Ibaka is not a typical post scorer, and Gortat would bring yet another offensive dimension to OKC. Not to mention “The Polish Hammer” blocks nearly twice as many shots as Perkins in seven more minutes per game. Losing Perkins’ locker-room leadership might be tough for the Thunder, but the 28-year-old Gortat is a significantly better player (Gortat’s 16.4 PER is nearly twice Perkins’ 8.4).

Brown isn’t the most consistent scorer, but can pack a huge punch off the bench. He could likely work with Kevin Martin in the Thunder’s second unit. I don’t know about you, but I’d feel a lot more comfortable with Brown, who won two rings with the Lakers before cashing in with Phoenix, than Reggie Jackson on the floor come Playoff time.

Last season, the Thunder did not look good enough to beat the Heat in the Finals. Then they downgraded from James Harden to K-Mart (II). I can’t imagine that will put them over the top, but I think this trade would. Personal theory: If you can sniff a ring, go get it.

Meanwhile, Perry Jones has appeared in only 17 games, and Jeremy Lamb 16 this season. They’re not relevant to the Thunder’s short-term success.

What’s in it for Phoenix:
The Short Answer: They get young talent for veterans.
The Long Answer: The Suns (15-30) are going nowhere fast. This trade would stick them with Perkins for an extra season than they’d be paying Gortat, but it’s worth it. Nearly everybody is coming off the books after the ’14-15 season in Phoenix. That includes Channing Frye, who’s getting paid over $6 million annually and Michael Beasley ($6 million annually).

Perkins’ deal also expires after ’14-15, which falls right in line with the rest. They won’t have the dough to attack in free agency in a big way until that summer anyway, so having an extra year of a hefty salary probably won’t impact them much.

Just for paying Perkins and admitting defeat with a terrible team, they get two 2012 first-round picks—including one lottery pick. Both Jamb and Jones have loads of upside, and this deal has big potential for the Suns down the line.

Phoenix would be able to move forward with a core of Goran Dragic, Kendall Marshall, Markieff Morris, the underrated Jared Dudley, Lamb, Jones, their own lottery picks, a couple of the Lakers picks from the Steve Nash deal, a TWolves pick from the Wesley Johnson trade and, if they manage their books well, at least $30 million in cap space in the summer of 2015. Not bad.