Who Makes The Dream Team? 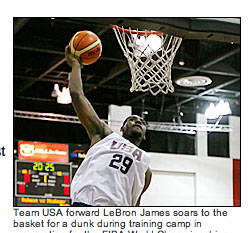 Let’s get to it. Also, the Sonics situation is getting its own post momentarily…

QUOTE OF THE DAY
“In some ways, people are a lot like animals. I’m mesmerized by tigers. Their eyes, their stripes, their constant quest for survival. They almost have a sense of mysteriousness about them. They pull you in and make it difficult to look away. They make you wonder what is behind their gaze. A sense of eerie awe comes over you in their presence. The fear they give you when you pass them is stunning. Behold the beauty of the tiger.” — Britney Spears.

THE LINKS…
• The US Men’s National Team started practice yesterday out in Vegas, and already everyone’s gushing over Coach K and his ego-free attitude (well, except for his own ego, of course). Mike Wise says the team is running hard and fast, hoping to flourish in transition. Dwyane Wade has gone from an afterthought his first time on Team USA to “a key guy.” And Coach K divided the team into two groups, one of big time scorers and one that seems more balanced.

Anyone know why LeBron is wearing number 29 in this picture in the Washington Post?

What I’m curious about is that there’s 24 guys there, but no more than 15 will go with the team to Asia in two weeks. So who’s going to be left behind? My completely uneducated guess:
Kobe (injured)
Lamar Odom (family issues)
JJ Redick (injured)
Amare Stoudemire (recovering from injury)
Chauncey Billups (family reasons)
Paul Pierce (about to have surgery)
Shane Battier
Adam Morrison
Luke Ridnour
The real decision will come down next week.

• As it turns out, LeBron’s Nike contract does have location bonuses. And as this article points out, wait a few years until Nike gives Bron a new deal with even larger bonuses. Funny, because I’m still hearing that this is wrong and that there are no location bonuses.
• The Rockets have signed Vassilis Spanoulis, who I’m pretty sure works here in our advertising office.

• Don’t count Michael Jordan out! The BETcats have signed Othella Harrington. If he’s not able to contribute immediately, he’ll fill in on “College Hill” from time to time.

• Nets rook Josh Boone got some surprise cut-up yesterday. What’s strange is how they aren’t putting any timetable on his return. (Note how he shot 28 percent from the free throw line in summer league action.)

• Catching up with the Portsmouth Summer League.

• The Spurs will get Jackie Butler. Love the first line here.

• He’s back! It’s the sausage king of Chicago, Jackson Vroman.