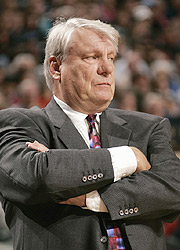 Don Nelson has always seemed like a man of simple tastes. Sure, he’s got the beach house on Maui, but he also prefers his beer in cans and has a body that looks like it was built on fast food, bar snacks and room service. In fact, the 67-year old has been voted “NBA coach you’d most like to share a case of PBR and a sack of White Castles with” a record-setting 10 times.

Which brings us to the latest Nellie-related news, best shared with a hearty “what the F**K?” Apparently he’s dissatisified with his current three-year Warrior contract (which he just completed the first year of) and wants to renegotiate. He allegedly wants his playoff incentives (which nearly doubled his salary last year) to be made part of his regular deal.

This is all well and good, I suppose—after all, Nelson did lead the Warriors on an improbable playoff run last year (as much as a coach can lead a team) and brought a lot of attention to the Yay. All of a sudden Golden State is a desirable basketball destination again. (And he’s also being sued by Mark Cuban, which in and of itself might make him deserving of a raise.)

But then again, whenever athletes pull this stuff, they get killed for it, as Marcus Thompson II of the San Jose Mercury News rightly points out. And just because Nellie is a good quote and a media favorite doesn’t mean he should get off unscathed. Does it?

(Let’s also not forget the way he left Golden State last time. Maybe adding more guaranteed money to his deal—especially while they’re still paying the LAST coach—isn’t such a good idea. You signed the deal, Don. Now honor it.)

EDIT: As linked to earlier today by my esteemed colleague Mr. Mutoni, apparently Baron Davis thinks Nellie deserves a raise, too. But of course. Players pretty much have to support renegotiation—remember Scottie Pippen’s semi-annual contract woes? But Pip had an unfortunate habit of locking himself into long-term deals right before the entire League’s salary structure leapt upwards. He actually WAS underpaid most of the time. Nellie? He’s coached all of half a season, and benefitted from one of the most lopsided trades in recent memory followed by the most fortuitous first-round playoff matchup ever. Hell, if anyone deserves a raise, it’s Chris Mullin.

And I’ve never understood why players and coaches think they deserve a raise after having a good year in the first place (assuming they’re under contract). Are we supposed to believe that the long-term contracts they sign are only good for mediocre seasons? (And if that’s the case, why can’t contracts be renegotiated DOWN after a poor season? You can’t have one without the other, as far as I’m concerned.) Think you’re gonna deserve a lot more money down the line? Sign shorter contracts. Year-to-year, even. Then you can renegotiate EVERY SUMMER!