Who’s in Your Five? 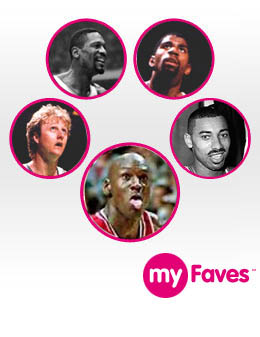 There’s been a lot of talk lately involving different current players breaking into the NBA’s all-time top five. Mainly Tim Duncan and some other guy. To that I say, um, what?

Look, those guys are great players. No question. But do you really understand how good you need to be to be top five all-time? How RIDICULOUSLY talented and accomplished you need to be? Check it out:

• WILT CHAMBERLAIN. Two titles. Four regular-season MVPs. 13-time All-Star. 11-time rebounding leader. Seven-time scoring leader. One-time assist leader. The only player in NBA history to average 50-plus points in a season and score 100 points in a game. Averaged 37.6 points and 27.0 rebounds per game as a rookie, winning both the Rookie of the Year and MVP awards. He was also the All-Star game MVP that year, with 23 points and 25 rebounds. Had sex with every female on the planet at least once. Averaged 30.1 points and 22.9 rebounds for his career, 20/20-plus for his first 10 seasons. Unstoppable offensive force.

• OSCAR ROBERTSON. One NBA title. One regular-season MVP award. 11-time All-NBA. 12-time All-Star (three-time MVP). Rookie of the Year. Only player in NBA history to average a triple-double for an entire season (1961-62, 30.8 points, 11.4 assists and 12.5 rebounds). First player in NBA history to average 10-plus assists a game, first guard to average 10-plus rebounds a game (which he did three times). He actually averaged a triple-double over his first FIVE seasons if you take them all together. Averaged 25.7 points, 9.5 assists and 7.5 rebounds for his career. Hoosiers lies.

• MAGIC JOHNSON. Five titles (three-time Finals MVP). Three-time regular season MVP. 12-time All-Star. 10-time All NBA. Four-time assists leader. Averaged 18.0 points, 7.7 rebounds and 7.3 assists as a rookie and DIDN’T win Rookie of the Year (it went to Larry Bird). But his Lakers won 60 regular-season games and the NBA title. When Kareem Abdul-Jabbar was injured in Game Six of the Finals, Magic started at center in Game Seven and went for 42 points, 15 rebounds, seven assists and three steals. The Lakers won the game and the title, Magic was named Finals MVP. Second all-time in triple-doubles with 138. Along with Bird, helped revitalize the NBA.

And that’s just seven. You can put Shaquille O’Neal and Karl Malone up there as well. Right now Duncan may slip in the top 10 behind those nine. The other guy? We’ll see.