Why The People’s Champ? 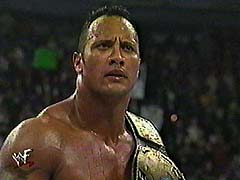 It’s re-design #2, and so I get to write one of these “This is what I do” posts again. I’ll start with the name.

Samonline was too cute. If I were to tell you that there is a story behind the title, would you like to hear it? Is that something you might be interested in?

Good. Now, the Original People’s Champ in my opinion is bah bah bah bah bah Rocky Balboa. If Appollo Creed is supposed to be Muhammed Ali, then Rocky is Joe Fraizer. No, not the real life Rocky that the movie was based on. Joe Frazier was the People’s Champ from the fighting city of Philadelphia. I write this to honor the legacies of Frazier and Balboa. Them and The Rock, who I would never attempt to disrespect on any level.
In recent years, others have given themselves the title “The People’s Champ.” The two most recognizeable being Paul Wall and Freddie Mitchell.

Paul Wall… I have a lot of problems with this guy. So he’s a white rapper, so what. That’s fine. He seems to be a hard worker (I refuse to use the word hustler to describe him), and I like some of his songs/verses. He stole the show on Still Tippin’, and oddly enough that was his tipping point. Once his face was famous, he had to cash in with as many guest spots as possible. His album (titled The People’s Champ of course) came out, and I sort of enjoyed it. The first time I listened to it, I was driving my car home from the vehicle impound lot, my father was in the hospital, and the Mets had just been swept by the Braves in Atlanta in season-ending fashion. That was a great experience.

Less than a year later, Paul was on the Hulk Hogan reality show recording a song with the Hulkster’s daughter Brooke. A song about how the paparazzi are all up in their business and why you hatin’ cause I’m shinin’ and all of that cliched stuff that everybody (FERGIE!) raps about nowadays. Maybe the paparazzi are taking pictures of you cause you are flaunting hundreds of thousands worth of diamonds on your teeth and jewelry. But I digress. If he can call himself the People’s Champ, then why can’t I?

The other guy who called himself TPC lately is ex-Eagle Freddie Mitchell a.k.a. Fred-Ex a.k.a. Hollywood Mitchell a.k.a. T.O. minus the talent. He is everything that is wrong with sports today. If I had to design an athlete from scratch, I would make him the exact opposite of Freddie Mitchell. I believe he was last seen on Taradise with his pants around his ankles. Seems about right. And you call yourself The People’s Champ?

So, for the past month we’ve had our new look website, and I explained my role back then. My blog is going to be a combo of my own blog entries and highlighting all of you NBA bloggers out there. The People’s Champ means I am about the fans. That’s the NBA group that gets s–t on all the time. My NBA opinions are strictly as a fan of the game, and none of them come from any secret insider bag of knowledge. If you want to know something about basketball, all you have to do is watch or look it up. We are living in the midst of the information revolution. I get what I need to know by reading what fans that care about their team think, as opposed to depending on alot of the detached professional writers. One thing I like about SLAM is that we are all able to let our biases scream out. Lang is a Hawks fan, Khalid is a Sixers fan, and if I hadn’t had all the pride stripped from me like Bruce Willis in The Last Boyscout, I’d talk about what a big Knicks fan I am. In The Last Boyscout, Bruce catches some guy sleeping with his wife and he just shrugs it off. That’s what it’s like to be a Knicks fan these days.

So, as always, email the link to your blog. If you’re a highly visible NBA blogger, I probably already know about you, but you should still send me what you’ve got. This experiment seems to be working, because we weren’t on the lowpost.net most influential list as recently as last week, but we’re at #3 now. If nobody’s ever read your blog and it’s something you’re too lazy to update on a regular basis, or maybe you even feel that there’s so much out there that your little voice won’t matter – send me the link anyways. There is nothing to small. Traffic will be driven to your blog. Who knows, that traffic could somehow lead to you making money off of it…

(That kind of talk seems to inspire people)

Alright, that’s the new mission of The People’s CHAMP.