Will Smith, Larry Brown and HDTV 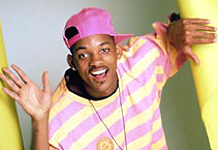 An interesting walk into the office this morning. I came up 24th St., per usual, and there were a bunch of production trucks and trailers parked all along the street. That’s nothing out of the ordinary — at least one day a week they’re filming something around here, and the crews are always accompanied by several trucks and buses and tables full of food and coffee.

But then I turned the corner onto Broadway to find two of trucks marked FEMA, a bus from the Centers for Disease Control and a couple of ambulances. I thought, Um…what in the world is going on here? Probably something not good. Then I walked into our office building and the doorman told me that the vehicles were part of the movie they’re filming, an upcoming Will Smith movie. Nice of The Fresh Prince to scare the neighborhood.

• Larry Brown is asking for $53 million from the Knicks after they fired him and after he did a crappy job coaching the team last season. Why $53 million? Because it’s there.

• Interview with Hornets owner George Shinn, though for some reason there’s a typo on the headline and it calls him GEORGE SHI. Interesting how he refuses to say the Hornets will play all 41 home games in New Orleans next season.

• Peter May takes on Bonzi Wells (who the BETcats liked), while Sam Smith puts a positive spin on USA Basketball.

• The Celtics have installed a “monstrous” HD scoreboard. The better to read brain types with.

• The headline here is about NBA stars “flocking” to a Las Vegas barber, but reading the story it seems like his only regular NBA customer is Shawn Marion.