Will the Players’ Union Fight for Artest and Jackson? 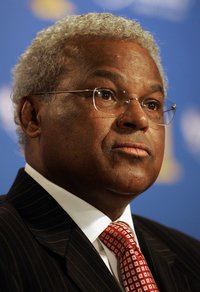 -Billy Hunter and the Players’ Union say that they’re “considering” an appeal of the Artest and Jackson suspensions. From the Associated Press:

“Based on prior precedent, we think the suspensions are excessive,” union director Billy Hunter said Sunday in a statement. “We plan to confer with the players and their representatives to consider all of our options for appeal.”

(This, of course, means that they’re not gonna do a damn thing about the situation.)

-Ron Ron, according to his agent, isn’t even gonna wait for the Players’ Association to step up: He’s appealing the suspension regardless. And naturally, in true Artest fashion, he also apologized to just about everyone on planet Earth for “putting himself in a position to be suspended.” Sigh.

–Now that Z-Bo is a Knick, would Kobe want to play in the Garden?
-According to SBR’s Brian Berger, Kevin Durant is very close to becoming a Nike man.

Reliable sources have informed me that Seattle Supersonics star Kevin Durant, the 2nd overall selection in the June NBA Draft, is finalizing an endorsement deal with Nike. I have not been able to secure the terms of the deal but am told it is a multi-year deal.