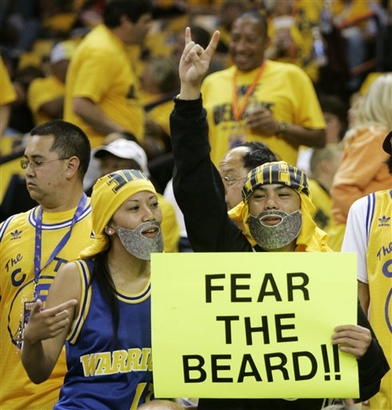 CHICAGO: I’ll go with Kirk Hinrich. They needed someone to offset Chauncey, and Kirk actually outplayed him. Truthfully I did not watch one second of this game. It was a 3-0 series on Mothers Day.

UTAH: Carlos Boozer. The Warriors are soft in the middle and Boozer loved that.

NEW JERSEY: Jason Kidd. The triple doubles happen every day (or so it seems in the playoffs this year), but when Jason hits 5 threes as well, the other team might as well stay at home.

SAN ANTONIO: Tim Duncan. 33 and 19. He won his first ring as the franchise player and Finals MVP before Shaq did, and Timmy is still capable of the type of dominance few are.

GOLDEN STATE: Baron Davis. Oh my God did he do it to Kirilenko. Baron had a great game, and that dunk was the exclamation point of exclamation points. Picking up a tech celebrating it just made the whole play better. There was a lot of pressure on Baron Davis to celebrate a moment like that in the proper fashion and he came through with an assist from Stephen Jackson.

Congrats to Bryan Colangelo, executive of the year. Well-deserved.

And now… there have been many times on Player of the D.A.Y., the regular season version of this page, where I felt the need to expand on the evils of fast food. You might remember the Taco Bell rats and the guy that killed himself when Quiznos stole his money. Today, it’s the grand daddy of them all. McDonalds. WARNING: this is much worse than a Morgan Spurlock movie about hygiene. This is… this is bad.