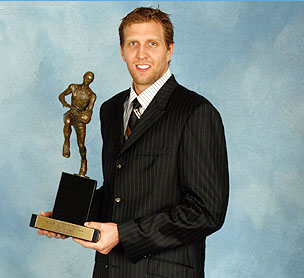 You never know. At about 12:15 A.M. (I think), I was sitting there watching a playoff game that we’ve all seen a hundred times. The Spurs were going to do enough to win, Phoenix would once again prove that offense and aesthetically pleasing basketball doesn’t win championships. I was ready to watch the Spurs grind it out, catch some of Shaq on the postgame, and then prepare myself mentally to watch Heroes.

Well… all of that changed pretty quickly. In a move that could not have possibly worked out better for the NBA, they get to make the announcement they’ve been dreading, and nobody will care. We’re all waiting to learn about who is suspended and fined or who is not. Meanwhile, the NBA gets to officially announce that Dirk Nowitzki is the MVP. This was the news that people were lining up to make fun of. And now it’s just whatever. Congrats again Dirk, but uh… you know.

CLEVELAND: LeBron. Mikki Moore woke him up with that foul on Pavlovic. Bad idea.

PHOENIX: Steve Nash. Lost in all of the tomfoollery-shennagians-chaos-madness and the key plays Amare made and even Marion’s D, is that Steve kept the Suns from quitting as he made play after play. The Spurs weren’t just laying down for the Suns, and Steve kept setting up his teammates and making shots. He found Amare twice with behind the back passes with everything on the line, and he had that play where he spun Ginobili out of the way and found Raja, not to mention that even when he was missing free throws, he still hit enough to seal the win. Steve also added tumbling into the scorer’s table to his series greatest hits of getting his nose busted and private area kneed. I thought Dallas didn’t re-sign him cause he was too fragile? Steve and Ginobili should be getting hazard pay for this series, and it’s only been 4 games so far.