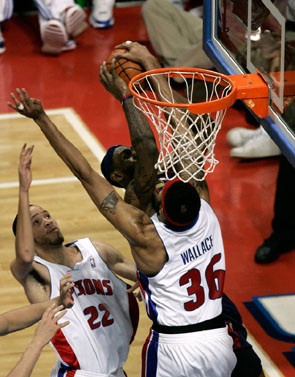 Well, there was one game and we’ve already covered it from every angle. Except for the first 47:55 of game time, but who’s counting? Rasheed Wallace made the difference for the winning team, which was the Detroit Pistons. On top of his 15 and 12 and 7 blocks. On the left, there is a photo of one of those blocks. That is clean too!

And then, Sheed left Donyell Marshall wide open on the key play of the game. Clearly he was baiting LeBron into passing the ball, knowing he couldn’t give up the opportunity and that Donyell would miss.

Ha ha, I’m having fun. But here’s something not so fun to ponder. Tonight there is the lottery and Game 2 of the Western Conference Finals. After that, there is ONE more playoff game this week. You’ll have to wait until Saturday for the next game, and Monday is Memorial Day and we’re closed. I hate the NBA playoff schedule.

Since there is no game on Wednesday night, I might have something ambitiously contrived for you on Thursday morning.

Big softball game this afternoon. I was just asked if I’d be willing to pitch. Just because I despise Roger Clemens doesn’t mean I won’t throw at your head. Let’s do this.