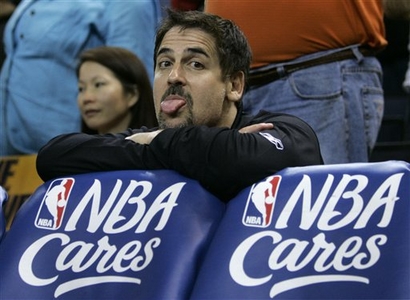 A whole weekend’s worth of W.I.N.N.E.R.S. to dig through. No time for small talk. Let’s go in reverse, starting with yesterday’s games and going backwards through time.

GOLDEN STATE: Baron Davis. The Warriors could have lost this game so many times. Baron kept making sure they didn’t let momentum get away. Among his 7 or 8 sensational plays was a bullet pass to Biedrins for a dunk when the Mavs needed a stop. That ball went at least 150 MPH. Baron is having an amazing first round.

NEW JERSEY: Vince Carter. He kept attacking the basket over and over. When Vince does that, it means he cares. When he cares, he’s one of the best players in the league. The alley oops were extra. Jason Kidd’s unlikely shooting display to go along with another loaded stat line was in garbage time. Garbage time beginning around the 9 minute mark of the first quarter.

PHOENIX: If I must choose between Nash’s 23 assists and Amare’s 27 and 21… Nash. Tough to separate the two cause they are so connected.

CHICAGO: Ben Wallace, though its more of a season achievement award. The Bulls have not been out of the first round since Jordan, they gave Ben all that money, and here they are beating a team with Shaq. Big Ben was the starting center opposite Shaq, and he did hit 7 of 8 free throws. Give him his due as a leader.

DETROIT: Chauncey. The next round will not be so easy.

UTAH: Deron Williams. They were waiting for him, and he came through.

SAN ANTONIO: Tim Duncan. The Spurs will be the Spurs until the day he dies. Double-double, 5 blocks, taking back home court. Carmelo did have double digit rebounds. That’s almost as fluky as the #8 seed beating the #1.

CLEVELAND: LeBron. Man, a basketball series and team can not be more tainted by injury. This is worse than when Kenyon Martin broke his leg before the C-USA tourney.

CHICAGO: Luol Deng. Breakout under the radar star of the playoffs so far.

GOLDEN STATE: The Warriors crowd. No disrespect to the players like J-Rich with 30 or Baron playing at an MVP level to put it mildly. But we’ve been hearing about these great Warrior fans forever, that love their team even though it’s been terrible for over a decade. They took a lot of frustration out on the Mavs, and that is what home court does. It reminds me a lot of the ’02 Angels in baseball. The Yankees had no idea what they were getting into going up against those fans. Dallas is a team with a lot of poise and toughness, and they looked scared.
And we’re caught up.