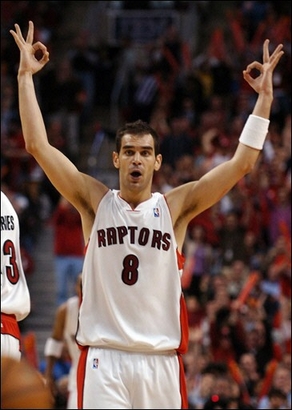 I have not mentioned the Toronto Raptors yet today other than to say Vince Carter passed up a chance to go to the free throw line and tie the game against the Toronto Raptors. There is an old cliche about playing to tie at home and win on the road, but when the other team has had its point guard taken to the hospital and you’ve got a PG averaging a triple double on your side, going to OT you have the advantage.

TORONTO: Then again, Jose Calderon had 25 and 8 off the bench in the win.

DALLAS: Dirk Nowitzki. Finally coming through. The season was over and he saved it. Rather than getting into a whole big thing about whether he is or he is not the MVP or a leader, I have an easier solution. Do it again Dirk. Let’s see it on the road now. No excuses about being guarded by aggressive smaller players, or the system, or double teams, or whatever reasons there are. Does anyone remember this? Dirk has sucked against the Don Nelson coached Warriors in Oakland, and that is a fact. He needs to overcome that. But right now, after last night he is a W.I.N.N.E.R. We have been down this road with Dirk before, when he has the big clutch moment and then everyone gushes oh you can’t stop a guy that’s 7 feet tall, can hit from anywhere on the court, can not be guarded, is playing at such a high level… and then he goes back to being a guy that floats around the perimeter and gets tight. That is not allowed tomorrow night in Oakland.