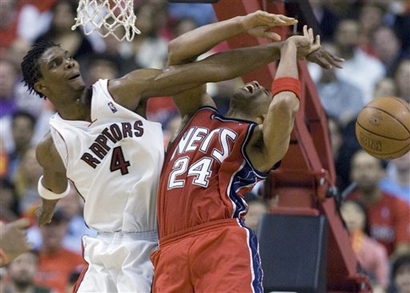 First, a sad goodbye to Rick Carlisle, a coach who did the best he could through all kinds of craziness in Indy. As wild and fun to laugh at/lament for all of the ills of society as the Pacers were, Rick was always the dullest of personalities. He was forced out of Detroit after building the foundation of a champion, and he kept going back to the playoffs undermanned. Worst of all, he was forced to endure the Triple Single a.k.a. L’il Dun on his way out. Good luck in the future Pacers.

What does W.I.N.N.E.R.S. stand for? Great question!

And now to hand out some awards.

CHICAGO: I’m torn between Ben Gordon and Luol Deng, and even the swagger of Nocioni. But every year there has to be a breakout star of the playoffs. It’s happening earlier than ever this year, but it is Luol Deng. He gets the award for this game, although you could also give it to Dwyane Wade’s various protective pads. Nah, it’s Deng.

TORONTO: Chris Bosh. Not only did he play like a franchise player and as they say “assert his will on the game”, but he did this which is also pictured here. If the victim of that block had been Vince not RJ, it would have set a record for most wallpapered picture in the history of Canada.

PHOENIX: Steve Nash. He got a little 24 minute workout, some oohs and aahs, nice passes, then he got to lay on his back and watch an NBA playoff game courtside. Not bad work if you can get it. People have been wondering how the Suns will hold up with the way D’Antoni kept his bench on such a short leash all season. This is how. By scoring a bajillion points, causing the other team’s best player to have to exert more energy controlling his frustrated facial expressions on national TV than playing basketball. Also by napping through the fourth quarters.