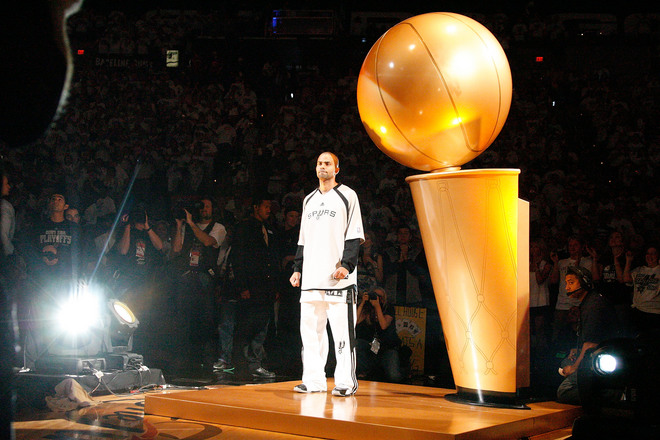 I sat on a couch watching game one of the NBA Finals, just like many of you out there. At some point in the third quarter, my girlfriend sat down next to me and asked “Are you having fun?”

I changed the channel to the Yankee game for a minute, and ARod was at the plate with the bases loaded in the top of the ninth. I just so happen to be facing a team with ARod on it in fantasy this week. Insurance grand slam. To quote Marv from Sin City (I was reading The Hard Goodbye recently), “ain’t that a kick in the nuts.”

Lang and Ben were at the game and have already filed extensive notes, but this is the Finals so we need everybody to be on top of everything. One thing they missed was the halftime show on T.V., which featured a segment on the relationship between Tim Duncan and Gregg Popovich.

It was a well-done and enlightening perspective on the beautiful relationship between two grown men. It also reminded me of a video I once saw about David Koresh and the Branch Davidians. Wow, the San Antonio Spurs sure are tight family for people that are not blood-related. Maybe it’s because the father figure’s name happens to be Pop, so you have grown men referring to some random authority like he is their daddy. I guess that’s how you win championships and stay so grounded and solid in an NBA landscape of chaos. Can we fly a satellite with infared over their practice facility and find out how many guns they have? Robert Horry, put the kool aid down.

As for the game itself, LeBron topped his performance from the last round, as all of the truly great ones do when they reach that next level. Against the Pistons, his game 1 featured a 10 point night, refusing to shoot the ball in the fourth quarter, and passing to Donyell “Used to look like Ludacris and that’s cool because he is a successful rapper and actor that attracts ladies and money but now he looks like Bubbles from The Wire who is a homeless on-and-off junkie” Marshall. LeBron played even worse than that game one last night. So, it is reasonable to expect his play to dramatically improve as the series moves on.

To be fair, two of LeBron’s more established formerly All-Star caliber teammates are Big Z and Larry Hughes (uh… he had that one great year with the Wizards, which of course was his contract/walk year). They combined for 4 points and 1 assist on 2 of 13 shooting. Thanks guys.

One highlight of the game was the Drew Gooden “flagrant foul.” Okay… He did make a little extra contact with Manu on the play, coming around with a second hand on the foul. But Manu, Manu, Manu. Not only was his reaction to getting hit extremely delayed, he even pretended to be upset by the foul. That’s right, faking anger at imaginary fouls. Jake wrote something recently about how LeBron should be on Inside the Actor’s Studio with James Lipton, talking about his basketball performances. I say Manu should be on that show, like any other actor talking about acting. He’s like a one man theater troupe out there.

The Spurs seemed rusty in the first half, or maybe they just weren’t hitting their shots. Even when the Cavs took the lead, you never really believed it was possible for them to win the game. The inevitability of a big Spurs run was always looming. Like many people, I passed out during the fourth quarter. Since there is no Barkley to watch, I will channel the Chuckster for you “Tony Parker… played… … … faaaantaassstiiik.” Here is a photo of him next to, I dunno, a rejected Pink Floyd prop.

So… Lang and Ben should have updates from Texas. The next game is not until Sunday night, when the NBA Finals dares to go head to head with the Sopranos series finale. There’s a whole weekend ahead of us until then. Looking forward to the analysis of every possible little angle.