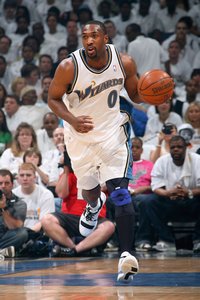 Gilbert Arenas has a decision to make: The Wizards have offered him a huge deal, something in the neighborhood of 125-127$ million.

Take it or leave it, Gil.

That’s a lot of money, and all things considered, Arenas would be nuts to turn it down. And Washington isn’t the only team willing to throw big money at Agent Zero either.

The free agency period opened early yesterday with Arenas receiving an offer from the Golden State Warriors — his former team — for a five-year deal that would pay him just less than $100 million. But it did not appear yesterday that Arenas was seriously contemplating the offer.

You’re gonna have to do a lot better than that, Warriors! Or, you know, just hand over the keys to Monta Ellis.