Foye, Miller Traded for No. 5 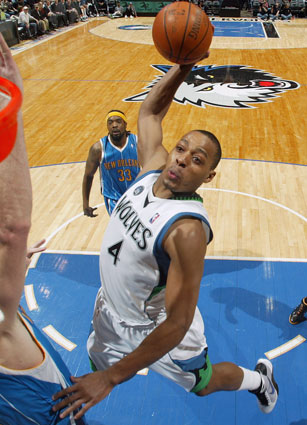 Last night, Minnesota and Washington rounded out a busy day of trades (and head-scratching trade rumors). David Kahn, the new Wolves’ president (he’s had the gig for little over a month), made his first big move.

Mike Miller and Randy Foye are no longer gainfully employed by the T-Wolves, meaning that Minny will likely be looking to shore up its backcourt tomorrow night during the NBA Draft.

The Star Tribune has more:

The bold six-piece transaction that sends Mike Miller and Randy Foye to Washington for the fifth pick in Thursday’s NBA draft begs a question: With the hours quickly ticking away, just who is he after in a draft some NBA executives have called the thinnest they’ve seen in years?

Kahn’s opening move essentially wipes clean the team’s existing backcourt and makes the Wolves further committed to youth and the 2010 draft, when the Wolves will have two more first-rounders if their own pick is in the Top 10.

It provides a fourth first-round pick to a team that already has accumulated the sixth, 18th and 28th overall picks Thursday and presumably doesn’t want three, let alone four rookies on next season’s team. With Foye’s departure, it sends away the player who — fairly or unfairly — most reminds Wolves fans of Kevin McHale’s failure in 14 seasons as Kahn’s predecessor.

It’s a new day in Minny, this much is clear. What remains to be seen is if all of the maneuvering and rebuilding can translate into the only thing that matters: wins.