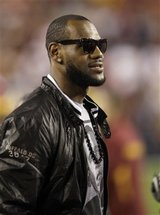 Adrian Wojnarowski of Yahoo!, who makes sport of critiquing LeBron, argues that LBJ could’ve benefited greatly from playing in Turkey (though the team wasn’t necessarily unhappy to not have him):

For all the mistakes LeBron made this summer, perhaps his biggest was failing to believe he needed Team USA far more than it needed him. That Olympic gold medal was far more about Kobe Bryant and Wade two years ago, and James still never has taken a team that belonged to him and won a title. He needed the work for his leadership and image. “It’s been said that LeBron could’ve benefitted here this summer,” USA Basketball managing director Jerry Colangelo said. “But it was never a consideration.”

Team USA wouldn’t have turned away James, but privately they’ll all tell you it’s been a relief to have him tweeting from 5,000 miles away. This hasn’t been the United States’ most talented team, only the most pleasurable to be around. With Durant and Chauncey Billups, two gentlemen and pros as the leaders, it’s no wonder. No one misses LeBron barking at cafeteria workers to give him eggs or throwing his sweaty jersey on the floor and barking at officials to pick it up.

Durant has had the quietest, most understated summer of all. He signed his max contract extension and scooped everyone with a gleeful proclamation on Twitter. When James was hosting parties in Vegas, Durant was practicing with Team USA in the afternoons and his own trainers in the evening. When the Miami Heat walked out on a smoke-filled stage in South Florida, preening, declaring themselves perhaps the greatest threesome since the Father, Son and Holy Ghost, Durant watched it all out of the corner of his eye – “The Decision,” the parties, the self-congratulations – and kept coming for them in the gymnasium, and now, here in Istanbul at the world championships.

Right. So, LeBron James is a jerk and Kevin Durant is everything that’s right with sports, and the world. Glad we got that sorted out.

Regardless of what takes place next season, the torrent of criticism will continue to rain down on LeBron. It’s now simply a matter of who can sound the most ridiculous while doing it.